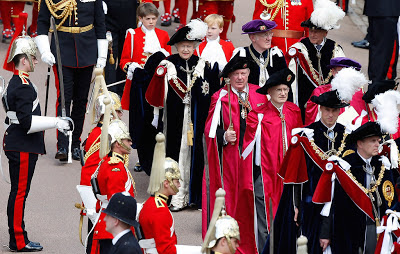 Given that the order was founded by Edward III in 1348, the ceremony is oddly modern: it dates only to 1948.  That was the date in which George VI re-instituted the formal investiture ceremony, which had been in abeyance since 1805, marking the order's 600th anniversary.  At that investiture, which took place on 23 April, St George's Day, six new members, including the current Queen and the Duke of Edinburgh, were invested as companions of the order.

At the same time, the order was reinstated as the personal gift of the monarch - it had previously been an appointment made on the advice of ministers.

The ceremony now customarily takes place in June - for some reason the first day of Royal Ascot Week (presumably on the basis that most members would therefore be within traveling distance of Windsor!). 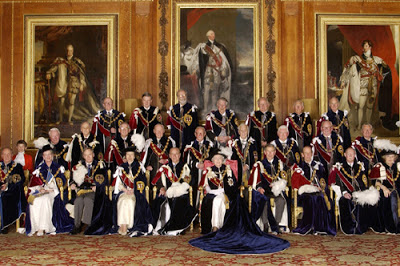 As we have seen, new members are named on St George's Day - this year there only being one, Lord Stirrup.  The Queen formally invests new companions of the order with the insignia in the Throne Room of Windsor Castle.  The insignia are proffered by the Garter King of Arms, the Usher of the Order (better known as Black Rod) and the Secretary of the Order.  The admonitions addressed to the new companions are in turn read by the prelate (always the Bishop of Winchester) and chancellor (currently the Duke of Abercorn) of the order.  These admonitions and oaths date back at least as far as Henry VIII's time, probably even further.  Two senior knights will assist in the vesting of the new knight.

Afterwards the Queen entertains the members and officers of the order, with their spouses, at a lunch in the Waterloo Chamber.  A group photo will be taken. 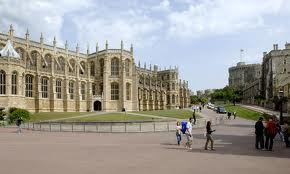 After lunch the Knights process on foot to a service in St. George's Chapel, wearing their blue velvet mantels, and black velvet hats with white plumes.  The processional route is through the Upper, Middle and Lower Wards of the castle to St. George's Chapel. The procession is led by the Constable and Governor of Windsor Castle and the Military Knights of Windsor.
In St George's a religious service is held and the companion is literally installed - assigned a stall in the choir of the chapel.  This stall is identified by a heraldic display: a sword below a helm topped with a crest, and above, a banner emblazoned with the companion's arms.  For more information on these devices, take at look at the website of Ian G Brennan, woodcarver to the Royal Household who creates them.   A brass stall plate is attached to the back of the stall displaying its member's name, arms and date of installation. On a member's death, these symbols are removed - the Military Knights of Windsor carry the banner of the deceased member and offer it to the Dean of Windsor, who places it on the altar.  The stall plates, however, are not removed; rather, they remain permanently affixed somewhere about the stall, so the stalls of the chapel provide a sense of continuity.

After the service, the members of the order return to the Upper Ward by carriage, presumably for tea and buns.

Email ThisBlogThis!Share to TwitterShare to FacebookShare to Pinterest
Labels: Ceremonial, Medals, Order of the Garter, Orders of Chivalry, Royalty