I Treated Myself This Week...

...by doing something I don't often do.  I bought myself a new book.

"Hang on!" My loyal readers cry "You can't kid us: the Edwin we know buys books all the time!"

Well yes, I do.  But I don't often go out and buy a new book for myself.  What I tend to do is to rely on serendipity to throw second-hand books my way (and given I sort books in a Charity Shop, quite a few come my way).  I very rarely buy a book as a pre-planned purchase.  And I hardly ever buy a new book at it's proper price.

But this week I read a review of a newly-published book that would do for The Wife's birthday* so I popped one into the shopping basket while I was at it.

The book in question was The Martian by Andy Weir, and I've just finished reading it. 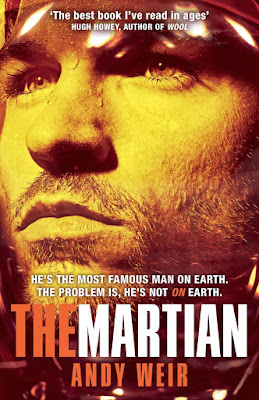 You might have come across it as it's been a best-seller and Ridley Scott has just made it into a film staring Matt Damon.  It's the latter that's prompted me to read it - I wanted to do so before the movie hype gives away all the plot twists (I have seen a trailer for the film though, and it looks good*).

*I'm a little concerned at the casting of Chiwetel Ejiofor as Venkat Kapoor.  Fine actor though he is, he's hardly a Kapoor...

The set-up is straightforward enough.  Disaster strikes a manned mission to Mars and they are forced to abort.  While evacuating their base one of their number is seemingly killed.  Yet it turns out he hasn't.  How will he survive?  And if he does, will it be for long enough to be rescued?  Given that the closest prospect of rescue is likely to be four years away, the second isn't a trivial matter.

So, what did I think?  I really enjoyed it.  It won't be everyone's cup of tea: this is the hardest of 'hard sci-fi'.  You might expect that being stranded on a strange planet might lead to some existential soliloquies from our hero, but you'll be wrong.  Pretty much the first third of the book consists of him doing sums, bodging and fracking in order to get enough food and calories to survive.  It's not until NASA's belated relisation that he's still alive that we get any dialogue or much characterisation.

In way this is one of the selling points of the book.  Weir doesn't argue so, but it's been said that with Mars exploration requiring a nine month journey, a month on the planet and then the anticlimactic nine month voyage home, Martian explorers will have to be very different from their Mercury or Apollo predecessors.  Their 'Right Stuff' won't be being jocks or excelling at outdoors-y stuff*, but much more likely being nerds happy to sit in confined spaces looking at computer screens.  Anyone with a tendency to existentialism (or too much imagination). a habit of talking to volleyballs or hopes of finding a Martian Man Friday would be weeded out of the programme pretty early on.  They would still have to be photogenic though...


In short, I would recommend this book.  But then again (for those of you who prefer not to have harsh reality in your sci-fi) I'd also heartily recommend 'Robinson Crusoe on Mars'.  It has some pretty cutting edge 1964 space-science (and space-potatoes).

Robinson Crusoe On Mars by crazedigitalmovies
at 17:40