With Kinfalnar still recovering from his centipede bite, it was decided that it was his turn to stay behind in Heybrook.   The party was thus to consist of Eril (Thief), Aldwyne and Egi (Dwarfs), and Dewan and Beorwald (Magic-Users).

This caused some grumbling when plans were made the night before the delve.  Aldwyne pointed out that the elf was one of the stronger members of the party and that going into the Warren with two magic-users ('stand-at-the-rear liabilities!')  meant that most of the work would fall to the 'poor bloody dwarfs!'  Eril snorted.  Beorwald and Dewan exchanged glances and began murmuring.  A Magic Missile started to circle Beorwald's head, causing Aldwyne to drop his tankard and trip over his chair as he tried to get under the table.  Dewan put him to Sleep, and the party left him there as they went to their bunks.

It was an early start the next morning.  Aldwyne swore that his sore head was down to Dewan's magic rather than the ale he'd been drinking.  The trek through the Tearmoss forest was becoming familiar now.  It passed without incident.

The main entrance to the Warren was locked, as the party had left it.  They had considered whether it would make sense to use 'the anteroom' as an advanced base, to cache equipment and as a place to rest.  Eril had pointed out that there were obviously other entrances and that cached material might not be safe.  The party decided to keep this under consideration: as they moved deeper into the Warren they might need somewhere to camp overnight, but this certainly wasn't the case yet.

The initial plan was to head out of the Anteroom by the west door and check the northernmost door from the room with the trap-chest (on the basis that it would fill a gap in the map).  They could then head either west or north.

When they reached the chest, Egi asked whether this wasn't what they needed for their cache.  Eril got out his thieves' tools and examined it closely.  After some consideration he decided that it was beyond his current skills to reset the traps in the chest and that there was no advantage in using it.  He could work with Exard the Heybrook blacksmith to create similar chest, but that would take some time and be expensive.

As expected, the northern door led to a right turn.  At the end of a short corridor a door opened into a room.  The carvings on the wall were magnificent, but twisted in nature.  Scenes of death, both violent and peaceful, were on every wall framed by grinning skeletons and ghoulish forms in ragged cloaks. 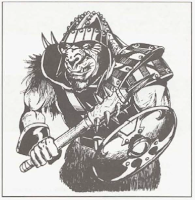 Of more immediate interest however, were the two large hobgoblins, who turned and faced the adventurers as the door opened.  The slightly smaller was carrying a polearm, the other (which had a distinctly blue large nose) a curved sword.

The hobgoblin with the poleaxe was killed by a well-aimed arrow from Egi, but attacks from Eril and Aldwyne missed.  Dewan called "Your bird!" to Beorwald, who summoned a Magic Missile, which hit the hobgoblin squarely between the eyes, felling him.  "And that's how a Mage rumbles!" he smirked to Aldwyne.

A search of the room reveled some graffiti ("The ranger has betrayed us") and an open chest, which the hobgoblins had been rummaging through.  This contained several bags of gold coins and a small bag of gems.  This amount of loot was all the party could carry, so they withdrew from the Warren.

The heavily-laden party made slow going back through the forest.  Perhaps because of this, they weren't paying too much attention to their surroundings and Dewan stumbled into a nest disturbing a swarm of spiders that attacked her, Beorwald and Egi.  As they weren't wearing armour, the magic-users were particularly badly affected, and Dewan was unable to cast the Sleep spell that would save them.  As Egi cast around him with his sword, Eril and Aldwyne unsuccessfully tried to light torches.  With horrific shrieks, Dewan and Beorwald collapsed.  Eril finally managed to light his torch, which was sufficient to ward the swarm off as Aldwyne dragged their colleagues away from the nest.  It was too late for the magic-users, who were clearly dead,  covered in large boils and lesions.   Egi was unconscious, but as Eril kept the swarm at bay, Aldwyne was able to remove the clinging arachnids from him and stabilize his condition.

It was clear that Egi needed to be taken back to Heybrook as soon as possible.  Eril and Aldwyne cached the loot and took him back with full speed.  Eril took Egi for medical attention, while Aldwyne went to see Robern the Miller.  At the cost of 2gp, he hired two pack mules and two of Robern's sons to go back to recover the bodies and the loot.  Fortunately, they were able to do this without any trouble.

Despite the large haul, the party's mood after this delve was grim.  Aldwyne was particularly hit by the loses.  Beorwald and Dewan were buried alongside Kinlee.  In the weeks the party had been in the village, Beorwald had become a feature at Efril's Place and Dewan was a cheerful and cheery figure.  Several of the villagers turned out to mourn.  Their equipment and the loot they had earned on previous delves were absorbed into party funds.

Egi took three days to heal from the wounds sustained from the swarm attack.

Eril visited Exard the blacksmith and started planning how a trapped chest might be constructed.

Aldwyne bought himself a bow and has decided to upgrade his chain-mail to plate armour.  He accordingly put an order in with the Factor.  If there is dwarf armour available in Ucham it should arrive in the next incoming caravan, due in seven days.

It was determined that for future delves one of Robern's mules and sons would be hired on the understanding that the son wouldn't enter the warren and would be provided with leather armour and basic weapons.

The bit of fluff between Aldwyne and the magic-users came first: a reflection on my own concerns.  But I have a timeline running for these delves, and it seemed unlikely to me that they party would wait the full ten days for Kinfalnar to heal.  It was handy that the fight with the hobgoblins turned out in a way that tied in with the conceit.

(I wrote that paragraph before things turned pear-shaped and the magic-users were killed!  But it adds a dark shadow on Aldwyne's 'story' for those who like that sort of thing.)

Equally, the question about caching was one that I'd been considering.  I honestly hadn't thought about using the chest they'd found until the party re-entered that room.  As it was, Eril failed his thief skills roll.  The amount of treasure recovered has highlighted the need for some cache or transport.  We'll see how the pack-animal idea works.  It has it's potential dangers.

Monsters and treasure have upped in the last two delves (well they have got further into the dungeon, haven't they?).  The real reason is that I have found a random generator that uses the Labyrinth Lord tables.  This is the OSR ruleset that most closely matches the one I am using (Old School Essentials).  OSE will soon have its own resources on-line following its Kickstarter earlier this year.
at 20:45