It was Beorwald's turn to stay behind (polishing his wand, washing his hair or some such), so today's party consisted of Aldwyne (Dwarf), Dewin (Wizard) , Kinfalnar (Elf) , Eril (Thief) and Egi (Dwarf)

The journey through the Tearmoss Forest was uneventful (Dewin was looking out for those sprites so she could introduce them to Mr Magic Missile).  The entrance to the Forsaken Warren was still padlocked as the party had left it; however, the 'Keep Out!' sign had been defaced by fae hands...


The party continued on the route it had taken last time, heading toward the west and north.  It became apparent that the northern corridor was the same as the one spotted from the anteroom, so the party headed east.

At the end of the corridor, the party came to a room that had obviously once been a study.  A desk stood against a wall, smashed bookcases and their contents littered the floor.   There was an earthy smell: paper rotted in mold-spotted heaps and shattered wood grows white fungus. 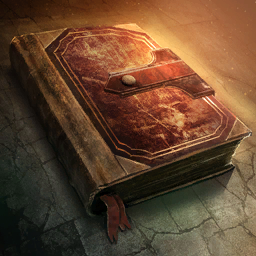 A thorough search of the room came up with a dog skull engraved with secret signs, two books still in usable condition (The Tome of Terrible Plains and A Complete Compendium of Halfling Heraldry), and a scroll in a case marked with the symbol of the full moon.

The party took the westward door from this room, and as they did so there was a large 'TWANG!'.  Aldwyne had triggered a trap, and was was struck by an arrow!


As Egi moved to give Aldwyne first aid and Eril dismantled the trap, three giant bats came out of their roosts, completely surprising the party.  In the ensuing fight two were killed by Kinfalnar (one with his bow, another with his sword) and the third by Egi.  Fortunately, Eril's bat-attracting cologne had been consigned to the bin. 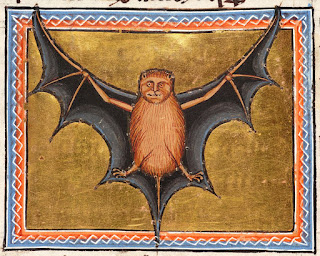 Rather like the previous one, this room was strewn with the smashed remains of rotting furniture. It looked as if it once held a bed, a desk, a chest, and a chair.  As search found a couple of stone urns containing 1.110sp and 1,100cp.

Following Aldwyne's experience, Eril was tasked with being especially careful checking the only other door out of this room.  He found no traps, and none were triggered when Kinfalnar entered.  However, he was attacked by a giant centipede

Kinfalnar collapsed, poisoned.  Reasoning that the party was already weakened and that with Kinfalnar down they would soon be heading back, Dewin cast her spell for the day, causing the centipede to Sleep.  Eril decapitated it.

The party then realised that this room was just the thing they'd been looking for.  Niches were set into the wall within which stood clay urns. One of the urns had been shattered, and its contents have spilled onto its shelf and the floor. Amid the ash it held, were blackened chunks of something that might be bone.

The party then decided to withdraw and, taking the more direct route, exited from the Warren without any further encounter.  Similarly, the return through the forest the Heybrook was uneventful, if slow.

On examination the scroll proved to be one of protection from lycanthropes.  The party were unsure whether to keep this.  On consulting the locals (first discretely checking how hairy their knuckles were), they were assured that no lycanthrope had ever been sighted in Heybrook or the Tearmoss Forest.  The scroll was therefore sold to the Factor for 350gp.

One of the considerations in choosing to sell the scroll was that the Factor reminded the party that in his official capacity he had access to various potions and other items that could be of use to Licenced Adventurers.  For example, he could provide healing potions for 50gp (plus a handling fee of 10gp).  Feeling flush, the party ordered six.  They were told to expect a wait of three weeks.

Aldwyne and Eril healed from the wounds caused respectively by trap and bat.  After 10 day's bed rest, Kinfalnar recovered from the effects of the centipede's poisonous bite. 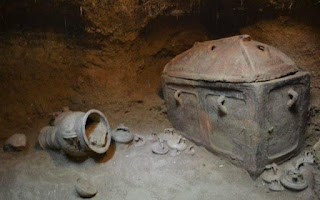