As previously explained,  Lord Hamar has decided to bring Civilization to the southern reaches of his domain.  The government has appointed several Factors in the region to facilitate this and in addition, the Church of St Ygg is sending missionaries bringing word of the One True Religion.

One of the sites selected for a factory is the village of Heybrook, due to its position where the Northern Road skirts the Tearmoss Forest.  Eventually, forestry licences will be sold by the administration and the nobles who buy them will have access to labour from the population earmarked for resettlement.  Once these bonded laborers have cleared the forest and worked off the costs of their relocation, they are expected to establish farmsteads, paying their landlords for the privilege.
But that is for the future.  Currently the Factor is concentrating on establishing trade routes and clearing troubles-spots.  He has centralised the existing timber and fur trade.  Licences has been issued to three adventuring parties: one, Barry's Boys are acting as caravan guards on the trade route from Heybrook to the county seat at Ucham (where the Factor's boss, the Sheriff is based); and secondly, Marteph's Mercs are tasked with dealing with the brigands operating out of the Ingwick Gap.  The third party is our group, the Warreners, who have received the licence to clear out the dungeon that lies beneath Stone Hill, locally known as the Forsaken Warren.

Hitherto Heybrook had been a typical marches village.  The population of about 250 is mostly human, with a smattering of dwarves and halflings.  It doubles during the two week-long festivals (the Sykes Week in Spring and the Panks Festival in the Autumn) when the trappers, woodsmen and outliers come into town.

These festivals had established Heybrook as a centre for local trade and were one of the reasons the village was chosen as the site for a factory.

However, the establishment of the factory, which seeks to put trade on a more 'regular' footing, and Brother Greward's work towards rooting out 'pagan practices' put the future of the festivals in doubt. 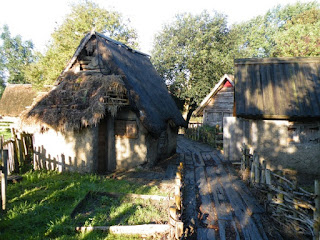 Our group has hired a bunkhouse, which they are in the process of improving.  Eril, Aldwyne and Beorwald claim to be trying to win local hearts and minds by frequenting Efril's Place, the local alehouse.  They have become chummy with Robern the Miller.

The Factor.  Male human.  40s.  Ambitious.
Herbert Brieheard - his assistant.  Male human. 25.  At the bottom of the slippery pole (but not for long).  Will stay in the Factor's service until he can do better.
Hammon - their dogsbody.  Halfling male.

Exard and Narder are the local leaders of the Old Congregations.

Mother Elix - wise woman/crone (depending who you speak to).  Female human.  Nobody knows her age.
at 10:17