I had written  a long and involved post about how I was going to generate random rooms and corridors, but then I found this method, and decided to try it out.   I played two games yesterday and it served me well.

If you're into thinking about the methodology of random dungeon creation, I can only suggest you read some of the posts on The Nine and Thirty Kingdoms blog.  The methods proposed there can be a little complicated, but it's an interesting discussion.

The reason I chose not to go with a dungeon generator or geomorphs is that they all tend to produce either suites of rooms or whole dungeons.  I want the feel of not know what's behind a door until I open it.  In future I may provide a 'found map', for which I'll use one of those methods.

Lord Hamar has decided to bring Civilization to the southern reaches of his domain.  Unfortunately, his predecessors haven't been so enlightened and allowed the South to operate as a number of semi-autonomous communities.  He has a large number of dissents waiting to be relocated and employed in agrarian pursuits, but before the expensive resettlement programme begins, various trouble-spots need to be cleared.

The government has appointed several Factors in the region and have made it known that they will give adventuring parties licence to clear out a such trouble-spots.  Bounties may be paid, and adventurers will be allowed to keep any loot they acquire through their licenced activities.

A factory has been established in the village of Heybrook and our party has acquired the licence to explore the dungeon that lies beneath Stone Hill.

Of our six adventurers, four set out from Heybrook: Eril the thief, Kinfalnar the elf, Dewin Hud the wizard and Kinlee the cleric.  Aldwyne the dwarf and Beorwald the mage remain to sort out accommodation and various issues with the Factor.

In their initial dealings with the villagers, the party had heard many fanciful rumours about what they had learnt was locally known as The Forsaken Warren.  The Factor had insisted that 99 our of 100 of these were false, but which one was true?

The two-hour journey out through the wild forest to the Stone Hill was uneventful.  On reaching the entrance, it was as had been described to them and led into an ante chamber. 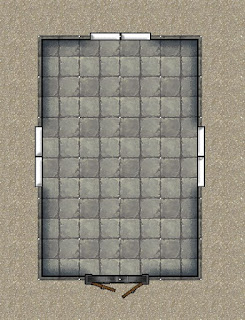 The doors to the chamber were ajar and from the amount of rubbish and debris, it had been open to the elements and used by various wild creatures as a cave would had.  Indeed, on entering the chamber, the party were attacked by three giant bats.

This first encounter demonstrated some weaknesses among the  new adventurers.  Although Kinfalnar was able to skewer two of the bats with his arrows, the third prove particularly agile and resilient.  In addition, Eril seemed to have used some sort of aftershave that attracted the beasts, and took the full brunt of their attack. 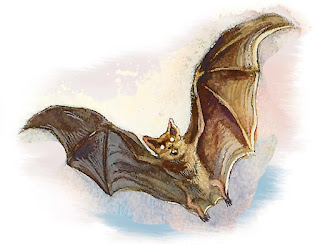 With Eril severely weakened, the party considered returning to Heybrook.  Their inexperience won through however, and they decided that it would be foolish to give up at the first hurdle.  Dewin suggested that Eril be left to guard the entrance while the rest explored, but he was adamant that he would not be left alone.

The party decided to try all three doors in this room before delving further into the dungeon. 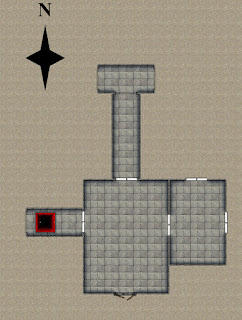 The north door lead to a corridor terminating in a T-junction.

The east door to a room lined with shelves with broken casks and bottles.  As expected, this room had been thoroughly looted.  However, an intensive search uncovered 30sp wrapped in a cloth and hidden in the bottom of a cask.  These were cached in the anteroom to be picked up on the way out.

The west door led to a corridor.  Almost immediately, Kinlee triggered a pit-trap, the fall being sufficient to kill him outright.  His colleagues recovered his body (and equipment) and returned to the anteroom to consider their position.  With Kinlee dead and Eril very weak, it was clear that nothing more could be done.  The silver pieces were recovered and it was determined to take Kinlee's body back to Heybrook where he could receive the rites appropriate to his religion (he had been an Acolyte of Silvanus).

Fortunately, the journey through the forest again proved uneventful.

A poor showing.  The party returned to Heybrook in a depleted state and with nothing to report to the Factor.  Many of the locals are followers of the Old Gods (the imposition of the Church of Ygg is one of Lord Hamar's civilising aims), so Kinlee was buried as he would have wished with an oak tree planted at the head of his grave.  There was much shaking of heads and many knowing looks from the villagers.  Eril took five days to recover from the bat attack.

Kinlee's kit and equipment were stored for future use (as per the Adventuring Agreement) and it was resolved to recruit a replacement.