Solo Dungeon Crawl #3: Back to the Warren

Following the debacle of the adventurers' first delve, they resolved that it was better for an exploration party to consist of five rather than four members.  They decided to learn some of the local lore about the Forsaken Warren, and began to term themselves The Warreners.

Beorwald the Mage remained in Haybrook.  Kinfalnar the elf, Eril the thief, Dewan the wizard, Aldwyne the dwarf and Egi set out for the Warren.

On the way through the Tearmoss Forest the party spotted a group of sprites flitting among the trees.  Advised by Dewan that they were rarely hostile, but that encounters tend to be troublesome, a detour was made.  However, as they did so, they heard a cry of "Run away wizard girl!".  For the next two days Dewan dribbled uncontrollably.

On reaching the Stone Hill, the party fixed a padlock on the entrance to the Warren and a Keep Out sign, endorsed with the Factor's official seal.


The party took the west door from the anteroom.  They bypassed the trap that had killed Kinlee and  came to a door.  In the room beyond a skeleton dressed in moth-eaten garb lay before a large open chest. The chest appeared empty, but two needles were projecting from the now-open lock.  Dust coated something sticky on the needles' points.  The skeleton had a backpack containing rope, a hammer and stakes and rotted rations.  A pouch contained 90gp.  Eril examined the chest, but didn't find anything of note. 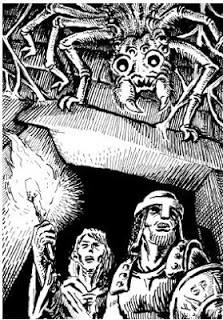 Taking the door to the southwest, the party entered a room only to be surprised by a giant crab spider which dropped onto Aldwyne.  Unfortunately it was able to get two bites in (though he successfully resisted the poison) before Dewan cast Sleep on it and Egi dispatched it.  The exit out of this room lead to a corridor so, in accordance with their policy of not getting too far ahead of themselves, the party returned to the room with the trapped chest. 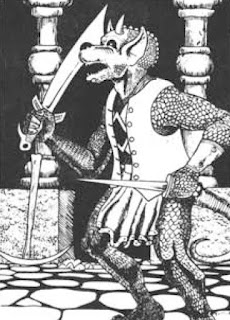 The other west door lead to a short corridor with a side passage.  As the party went through the door, a group of kolbolds came down the corridor.  They swarmed around the corridor, but were unable to hit the party before a bow shot from Aldwyne, a Magic Missile from from Kinfalnar and a stroke of Eril's sword reduced their number from seven to four.  Nevertheless a number of attacks left Egi down and unconscious.  The remaining Kolbolds were quickly dealt with.  Looting the bodies recovered a lot of tat and 102cp.

Egi being unconscious and both Aldwyne and Kinfalnar injured, it was decided to return to base.

On the return through the forest, a group of wild boar were spotted, but in good time to avoid them. 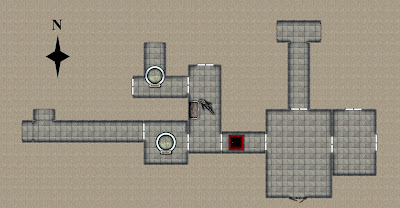 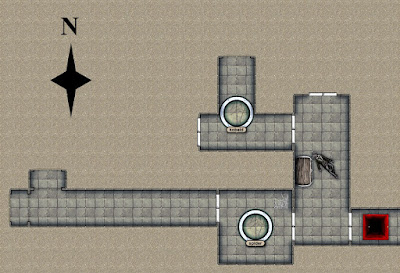 The party healed up within five days.  Dewan stopped drooling.