On the day of Beorwald's and Dewan's funeral the weekly caravan came into Heybrook.   In the next couple of days two of the new adventurers in town presented themselves at the Warreners' bunkhouse explaining that the Factor had advised them that they were recruiting.

Kirgil was a half-elf.  He gave the impression of a strong, well-built human, but with particularly fine features and strikingly bright green eyes.  He was equipped with plate armour and weapons, but no adventuring equipment.  Aldrin was a gnome, short with a long nose.  He had decided to fight against stereotype by being clean-shaven but (perhaps surprisingly given this) still wore a pointed felt hat.  He wore leather armour and around his neck a chain with a large gem attached.

Both were accepted.  They signed the articles of agreement and each paid 5gp into group funds.

By the time Kinfalnar and Egi had healed it was only two days before the weekly caravan was due.  As the healing potions the party had ordered three week's previously were due to be on it, it was decided to wait.  As it happened, Aldwyne's plate armour also arrived.  Each member of the group took a vial of the potion (in the case of the new recruits, the cost of these were put against future earnings) .


As no-one was healing, there were two new members, the party's treasure was under lock-and-key with the Factor and (above all) following the disaster last delve, it was determined that the whole party should set out.


They had hired one of Robern's mules and employed his son, Alhert, to look after it.  As previously agreed, Alhert wasn't expected to enter the Warren, but to guard the mule.  He was kitted out in leather armour and given a sling and dagger from the bunkhouse store.  Kirgil also picked out some basic adventurer's gear from the store.

During the journey through the Tearmoss Forest the party was shadowed by a group of Blink Dogs.  These kept their distance however and allowed them to pass once they proved not to be a threat.  In discussion afterwards, Egi and Kirgil disagreed on how many there were; the majority decided there had been at least four.

On arrival at the entrance to the Warren the party found that the lock they had placed on the door had been broken and entry forced.  There was no sign of who might have done this.  Alhert was left with the mule and given instructions to keep a careful watch.  He was told that if attacked he might consider barricading himself into the Anteroom and shouting for help.

The party planned to try the exits from the room to the east of the Anteroom.  They started by checking the north door.

A flurry of bats flapped through the doorway, their screeching barely audible as they careened past the party's heads. They flapped by harmlessly into the rooms and halls beyond.  At first glance, the room from which they came seemed empty.  As Aldwyne stepped into the room there was a 'Clunk!' as he stood on a pressure-plate and he was struck by a dart, fortunately, any poison that was on the dart must have perished, and had no effect.

Eril moved to dismantle the trap while the other members of the party checked the rest of the room.  This search came up with a hidden sack containing 30gp and 300sp.

The door out of this room lead to a short corridor, at the end of which a flight of stairs descended.  Not yet ready to go in the lower sections of the Warren, the party returned to the room west of the Anteroom.  Exiting this room into another corridor Aldwyne, who given his recent experience had been checking the ground before him with his crowbar, triggered a pit-trap.  This was negotiated safely and the party continued on to a t-junction.

Turning southwards, they came to a door.  Eril checked for traps while Kinfalnar listened for anything behind the door.  Neither found any to report.  However on opening the door, there were three hobgoblins in the room.


The party piled through the door in order to achieve the benefit of numbers.  Arrows from Kirgil and Eril slammed into one of the hobgoblins, killing it.  The remaining two came forward and both attacked Kinfalnar, fortunately without harming him.  In the ensuing melee Eril was wounded, but the hobgoblins were killed by final blows from Aldwyne and Kinfalnar.


A search of the hobgoblins bodies and kit resulted in a quantity of silver, a bag of gems and a selection of jewelry.


With over 3,000 coins the party were now at the limits of what they could carry.  They decided to return to the Anteroom and check on Alhert and the mule. 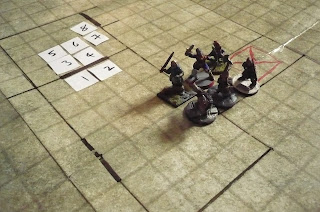 However, while doing this they encountered a group of eight Orcs, obviously coming up from the lower levels. 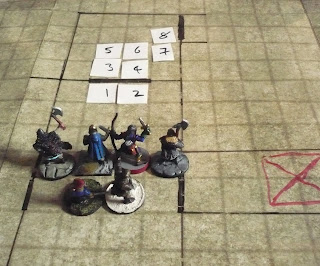 Fortunately, the party were able to seize the initiative and take position in the room before the orcs had entered.  They started combat by focusing on the orc's leader, who was hit by arrows from Egi and Aldrin, and a Magic Missile from Kinfalnar.  Despite all this however, he remained standing,  Each party soon took up battle lines with their heavy hitters to the fore and bowmen behind. 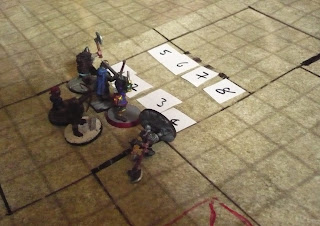 At one stage Egi was knocked unconscious but Aldrin dragged him out of immediate contact with the enemy, enabling Eril to administer a healing potion.  The two partys were evenly matched and the encounter was a hard slog, but eventually the Warreners' advantage in armour and use of four of their six healing potions won through.  When five of the orcs (including the leader) lay dead the remaining three fled.  A search of the bodies came up with a quantity of gold coins and jewelry.

Fortunately for the heavily-laden group, they were next to the Anteroom, so were able to reconnect with Alhert and transfer all the loot to the mule without any difficulty.  At the last minute, Aldwyne grabbed two of the orcs' short swords and two bows - Alhert's weaponry was upgraded for the return journey.

The return the Heybrook was uneventful.

The haul was counted and appraised.

The one from Hobgoblin combat was

and from the Orcs

The jewelry was traded to the Factor.  Aldrin took the gems as part of his share. 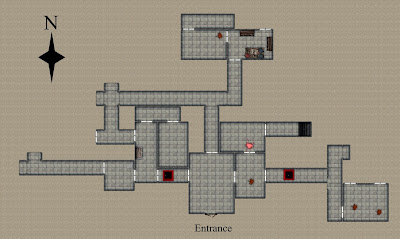 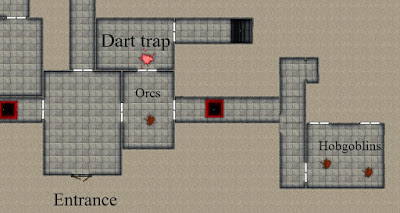 For the Wilderness encounter I used the OSE tables for the first time.  My determining roll meant I used the 'Unusual' column of of the designated table.  Hence the blink-dog.  On the Monster Reaction table I rolled 'Neutral, uncertain', hence the chance to avoid them.

In the combat with the orcs I assumed that taking a healing potion was a movement action, ie, one could take the potion but not move, and yet still attack.