Wow! My last Fantasy Thursday post (and that was only the second) was back in March 2016!  Nethertheless, given that it's my main hobby focus at the moment, I've decided to revive the series.

As regular readers will know, our main campaign is the Barrowmaze using Old School Essentials.

Sunday's session was a busy one: we had two and a half very well-paying delves (the half was a quick journey to pick up cached loot).  We had some classic encounters: a spectre, giant centipedes; an ochre jelly (which involved us setting fire to each other), giant crab spiders, a lich (arrghh!), and ghouls.  We play an Open Table, and were able to welcome a new player to the table (I think he may come back!). 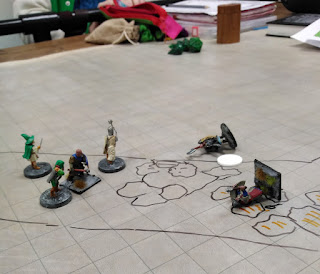 And only three PC deaths!  Surprisingly my character survived.  Again, regular readers will know that I'm notorious for having my PCs killed at Level 1.  This character (a Cleric of Solis named Leofric) is my 15th for the campaign.  Much to everyone's amusement he jumped from Level 1 to Level 3 in an afternoon!

Next Sunday's session will be me DM'ing, running The Hole in the Oak.  The following session (22 Dec) will be back to Barrowmaze with our extra-long Christmas session in which we will be raising money for charity by having a jar which will allow us to re-roll on payment of a fine.  This is a week-long fundraising system across the store in aid of MIND.

The Home Group has had two sessions down The Hole in the Oak, which I touched on last week. 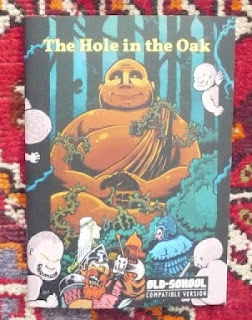 They're far from being Murder Hobos, and by savvy use of the Charm Person spell have got involved in gnome politics and picked up a lot of useful intel about the dungeon.  I've no idea what they'll do next (but I hope they go on a mushroom hunt for a crone I've introduced them to!).

We play on a Thurday night, however tonight's session has been cancelled due to illness and stuff, so I'm dabbling in...