After the drought, then the flood!

On 9 Feb we got one of our occasional games of Dungeon Crawl Classics in.  I've written about that elsewhere. 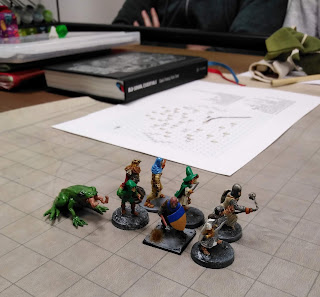 Sunday 16 Feb reverted back to our more usual Barrowmaze.  For some reason after encoutering five Giant Centipedes attacking a Giant Toad we rescued it and decided to take it back to our stronghold where we're nursing it back to health.  We haven't gone so far as to name it yet... 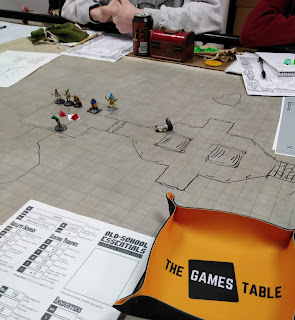 On 29 Feb we had our last trip to the Barrowmaze before the (in-game) six month break for the rainy season.  This marks the end of our fourth in-game year of the campaign!

For the first time in several sessions we actually entered the Barrowmaze rather that exploring the mounds on the Barrowmoors.  Much fun was had, loot was found, and new stuff added to the map.

For one reason and another we hadn't met to to play our Hole in the Oak mini-campaign since before Christmas.  However, on 21 Feb we met up at The Games Table to play a few boardgames (the main game was Ticket To Ride, with Battle Sheep as our warm-up and Exploding Kittens as the wrap-up).  I asked whether we wanted to carry on with The Hole in the Oak and possibly take it a little further: everyone seemed up for this.  I think I'm going to suggest we alternate between RPG and Boardgame nights (it'd be nice if we could do it weekly, but I suspect the diaries won't align).

Sadly, the RPG session we had planned for the last week of the month was again cancelled due to Real Life.  So I haven't yet had a chance to test the Dolmenwood Players' Guide.

I wrote about the games we played in the first half of the month here following the death of my long-term character (5th Level thief) Bil Lee.  After discussions with the GM, I was all prepared to introduce Bil's hapless cousin, taken from his cushy job in the Monkey Cabaret to serve at the pointy-end of Tong business as he was the last surviving male relative able to uphold family honour.

However, our next session wasn't in Mudharbour, but another town of the setting.  So, I thought, I'll play with my reserve character.  And I've fallen for him!

I think the moment Bolton the Mage came to life was when were were required to stop and take rations (one of the results on the encounter table).  Bolton hadn't got any of his own, so a fellow offered one of his (and asked me to roll the Usage Die).  In one fell swoop, the rations were gone.  Suddenly, he became this louche Caspar Gutman/Nero Wolfe figure.  The Fat Mage of Purbury was born!

Google helped by coming up with this fantastic image (which is apparently concept art for Assassin's Creed).  And Dave has created some house-rules for cigar smoking.

The session itself was fun.  After the experiment in the Hive, we returned to more tried and tested ground, pulling of a heist (using more of Dave's house-rules).  We were employed by Lady Elvira Bund, a local femme fatale, to regain an artifact that the local theives' guild have stolen from her father (she didn't realise that we'd pulled of that heist too and indirectly killed her father).

It all went very well, mainly due to the groundwork that the heist rules allow us to do in advance (ret-conned, it true heist movie style).  After minor tusssles with the thieves and gnolls, we recovered the artifact and much other loot.  Some of us gained a new patron: though one party member who was on a quest for redemption revealed that he had been involved in the death of Lady Elvira's father and was immediately killed by her.  This worked out well in the end - part of his quest was 'to be given a second chance' and he was revived by his goddess.

We also had another session in another part of the world, where we had anold-fashioned dungeon-crawl under the ruins of a Temple (complete with portal to Another Place and encounters with alligators and kobolds). 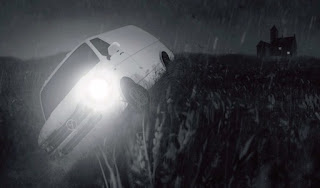 Our second session of the Forget-Me-Not scenario took place on 9 Feb.  It moved on from the slow start of the first session (slow as in 'building-up tension' rather than 'boring').  The party now know who they are, that one of their number is missing and have several leads to follow up.  In addition we had a major outbreak of temporary insanity (a bit of mud-wrestling and pistol-whipping) and coughing up of wriggling things.

Andy had recorded the play 'for training purposes'.  He since (with our acquiescence) decided to broadcast it on his Podcast.

Episode 1: The Cornfields of Your Mind
Episode 2:

I'm playing Charlie (the one who doesn't speak in the first episode!).

The observant will have noticed that 9 Feb was a busy day for me!  I played DCC at The Games Table from Noon until 4pm, Call of Cthulhu on-line from 6-8pm, and then the Black Hack from 8-11pm.  I don't anticipate being able to carry off such feats often, though I think the stars will aleign about every six to eight weeks.