At Moonricket Bridge: A DCC Game 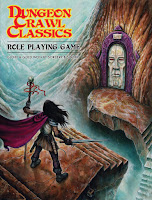 Today our face-to-face group had one of our (fairly) occasional games of Dungeon Crawl Classics at The Games Table.

The previous games I'd played had been Level 0 Funnels, where you start with four Level 0 characters of no particular merit and they are eventually picked off.  The survivors have gained enough experience to proceed to Level 1...

One of the things I quickly found out today is that Level 1 characters are only slightly less squishy than Level 0s!  Sadly we had a TPK on our first time out.

I like DCC, there's a lot of interesting stuff involved in it.  But the size of the rules and the amount of scrambling about trying to find what one wants (to say nothing of the number of bookmarks needed for simple play) makes me appreciate how well-thought-out the lay-out and simple lines of Old-School Essentials is.   The scenario we played, Moonricket Bridge, is a short one (but no less lethal for that!).  This was just as well, as I think we spent as much time discussing and trying to interpretate the rules as we did in actual play.  Obviously there's something wrong there.

This might improve as we play more often.  Our GM promises that this is the first of a number of loosly-linked modules (the Shudder Mountains setting) that we'll be exploring.  As she has volunteered to run a DCC module she's written at the UK Games Expo, she's got every incentive to get some practice in!

In summary, today was enjoyable (and any chance to get a face-to-face game in shouldn't be sneezed at), but the rules-scrambling was a little frustrating.
at 17:24