A little later than I anticipated, due to computer problems.

Our GM claims that January is problematic for scheduling.  Netherless he managed to put together two sessions of Barrowmaze.  I should have taken some photos for the blog, but of course didn't. 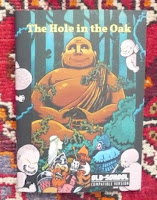 Knowing that I've run it at home and had one session at the FLGS, one of the other players suggested that I run the OSE Hole in the Oak module.  However, he was the only one who signed up for it, so we cancelled.  Although the home sessions went well, I completely fluffed the session in the shop, so I don't know if the word went round!

I didn't make it to any board game nights this month.

In other news from the FLGS (The Games Table), last month they announced that they were planning to move to larger premises.  This week they told us where.  It's a very good spot, slap-bang in the centre of Norwich in the wonderfully named Lower Goat Lane (for those who know the city, it's just off the Market Place).

I'm a big supporter of The Games Table.  In less than two years, Kieran has built a good business, but more importantly a great community.  It's done wonders for my social life and, as a result, my mental health.

We didn't meet this month. After two sessions playing Hole in the Oak, there's probably only one session of play left.  If the guys want to continue (which I'm not certain of), I've been thinking of various plot hooks that would lead on to other adventures.

Having heard a lot about the Discord Audio Dungeon on various podcasts, in December I took the plunge and signed up.  Like all social media it's necessary to filter which areas one engages in or be swamped, but that's OK.  It's a welcoming group and very easy to find games to join.

I've been taking part in a Black Hack game run by Dave Aldridge of the dpercentile podcast.  We've been lucky enough to be able to fit in a couple of games a week!

I've played a little Black Hack before, and am really getting into it here - it is a lovely, simple system that I heartily recomend.  Dave's setting - Melcher's Vale - is very nice.  In Feburary he's going to Kickstart a Zine which will detail a section of it, a city with a Fantasy Ku Fu vibe influenced by Shaw Brothers movies and martial arts videogames.  I shall be posting more about it when it launches.

I've been wanting to try CoC for quite a while, but never found anyone to play with.  Last weekend I took part in the first session of the Forget Me Not module.  An introductory module set in modern-day USA.  We all woke up in a crashed van in the middle of a corn field, and by the end of the two-hour session had discovered that we were the crew of a TV show 'The Supernatural Files' investigating spooky goings-on in Michigan.  The plot will thicken in a fortnight...