An Unboxing (In which I coin the term 'Dolmenesque') 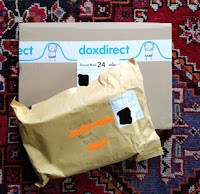 I got a couple of parcels today, which is always fun. 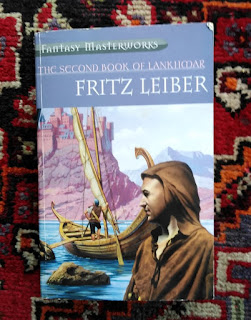 First up was The Second Book of Lanhmar.  I really shouldn't be buying new books at the moment as I'm supposed to be in the process of downsizing in advance of a house move.  But someone recommended Fritz Leiber's Fafhrd and the Gray Mouser stories and I've really enjoyed the ones I've read so far.  Their light tone and understated humour mixes well with the darkness of some of the story matter. 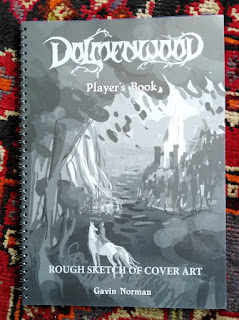 More excitingly perhaps was a draft of the new Dolmenwood Player's Book by Necrotic Gnome., creators of Old-School Essentials.  I've mentioned it before, but Dolmenwood is their weird, fairy-tale  campaign setting.

I've signed up to provide playtesting and feedback, so received the pdf last week.  I sent it to be printed off and spiral-bound by doxdirect.  This was a bit of an experiment for me, and I'm pleased with the results.  It was reasonably priced and only took two days to get to me from placement of the order.  It's certainly better that I could have produced at home.  The spiral binding will allow for some flexible use at the table.  I must say that I always prefer hard-copies over pdfs, which I find almost impossible to concentrate on. 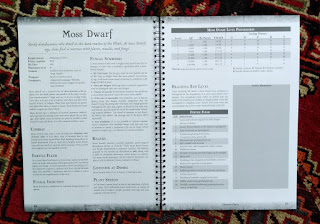 I would say that I'll give you my impressions when I've read it, but as this is a pre-publication version, I'm not supposed to!  Let's just leave it with the overwhelming impression of clear lines and good lay-out (which is something of a trademark of Necrotic Gnome's).  This is more than cosmetic:  having recently had a very frustrating session with some other rulebooks, I do appreciate the utility of having a reference that can be used at the table.

Some of you may remember that before Christmas I ran a couple of sessions of the Hole in the Oak module for what I called 'The Home Group' (I also ran a less successful session for my regular RPG group).  Anyway, Christmas, New Year and diaries intervened and we haven't played since: I was a little surprised when at our last meeting (for board-games) people were keen to pick up where we left off and even to carry on after the module.  Hole in the Oak isn't set in Dolmenwood, but it's as near as damn!  It will only take little tweeking to insert Dolmenesque elements.  I will digest the Player's Book and then decide how many to put into our game and whether we will go whole-hog into the 'Wood. 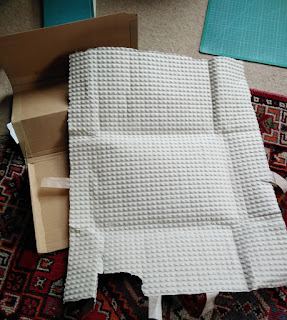 As a final aside, all of doxdirect's packing material was recyclable.  Very good to see.
at 14:57