Miskatonic Repository Convention was a two-day virtual convention that took place on 17 and 18 October, celebrating the Miskatonic Repository, the online collection of user-made content for Call of Cthulhu supported by Chaosium, the CoC publishers.  Details of the MR and several hundred products (mainly scenarios) can be found on the DriveThruRPG here.

As can be seen from the programme, there was a lot going on - much of it at UK-friendly times - but  unfortunately I've recently been working on Saturdays, so was only able to take part in the Suday sessions.  I was able to listen to the two panels, one on writing for the MR and the other on publishing on the MR (though, feel reassured that I have no aspirations to do so!).

But my main reason for 'attending' was to play!  The game I plumped for was 'Without Warning', written by Bill Adcock.  It was sold as follows:

1958 - The DEW Line of radar stations across Alaska and Northern Canada provide early warning in case of Soviet bombers coming over the Pole.  One of these stations has reported an injured technician and requested a routine supply flight be moved up to bring the injured man home and deliver his replacement.  That's where things begin to go awry. 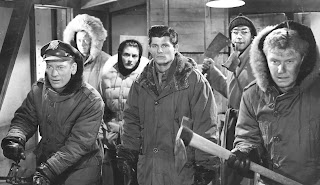 I won't go into details, as it was by way of a play-test for a scenario Bill will be publishing in the future.  Let just say that it was heavily influenced by a certain classic movie (but without the intellectual carrot!).  A great evening's entertainment.
Bill's other scenarios can be found on DriveThruRPG here.
at 23:27