Blackmoor (OSE)
As mentioned in last month's round-up, our regular GM is taking a break from his duties, so we're having rotating GMs.  We're maintaining continuity of characters, but the setting is not strictly the same as Dave's Blackmoor hack.
This month it was my turn as GM (my PCs having gone to 'Shroomfest).
The party rescued a damsel in distress and were taken home to meet 'her mother'.  They seemed to expect her to turn into a wolf at any minute, so didn't enjoy the tea, cake and lashings of ginger-beer as much as they might have.  But they agreed to accompany the young witch apothecary's apprentice on a foraging trip (on the basis that she is guiding them to an unlooted tomb of a Dwarven warrior).  What could possibly go wrong?
The group came across a group of Goatmen dragging a Halfling and a Dwarf along as prisoners.  After a rescue, the two were accepted into the party (they were PCs).  This was a decidedly bad idea.  The Halfling (Alignment: Chaotic Stupid) decided that it would be cool if he could creep up on two dozing Wyverns and tie their tales together.  Result: three PCs dead (in addition to one Retainer killed in the earlier encounter) and the rest scattered to the winds.
After our Christmas excursus (see below) we returned to the mission towards the Dwarven Tomb.  Giant vampire bats disposed of, the party came across a couple of Goatmen marking their territory*.  They put a well-crafted plan into action, killing the one with the paint-pot and toupee**, and capturing the other.  He was subsequently traumatised by the sight of the Halfling (literally) butchering his workmate and proved very helpful.
*Am I strange in that when I read on a random table of two Goatmen 'marking territory', I immediately see one with a pot and brush painting stones white, while the other loafs with a woodbine hanging from his mouth telling him what to do?
** Oh, I love random tables!
They took up position within striking distance of the Tomb (which they now knew to be the Goatmen's new base), only for an orc raiding party to pass by their camp.  The Dwarf's sense for treasure was all a-tingle, so rather than letting them go, they attacked.  At the cost of a dead Halfling, they now have almost as much*** treasure as their mule can carry.  They are thinking of abandoning their (vague) mission and missing friends, and heading home.
***Randomly rolled.
Wasters

We took on a job to go and steal a muscle car from one of the gangs in The Wastes, but got nowhere near completing it.  Our first attempt lead to a masacre, with only one party-member surviving.  On the second, we were ultra-cautious, and only covered half the ground necessary.  But we made the Big Score, finding a stash of loot that was so hefty that we couldn't carry it all away.
Grimbo Grotto 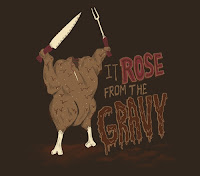 As a Christmas treat we played this "Christmas Farcial Horror Aventure" written by Goblin's Henchman, and had an absolute blast.
The funniest thing was when the party (having captured a Gnome) asked if there was anything dangerous in the next room.  I had to say in my (Scouse) Gnome voice "Well, there's a Giant Putrid Gravy-Spewing Undead Turkey.").  It took me three attempts to say that without cracking up and (foolishly) they didn't believe him.
The scenario is Pay What You Want on DriveThru RPG.  I was worried how this might go down, but it proved to be the highlight of the month's gaming!
at 00:41