Fritz Leiber, Swords in the Mist
In which our heroes Fafhrd and the Grey Mouser (strangely) transfer from the fantasy world of Newhon to the (equally fantastic) Ancient Near East. 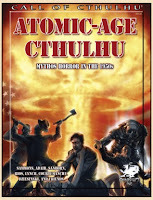 Atomic-Age Cthulhu: Mythos Horror in the 1950s
A series of seven 1950s-set Call of Cthulhu scenarios.  Most are based in the United States (the one exception follows a US Army tank crew in the Korean War) and tackle 1950s bugbears: - communist villains, nuclear power, juvenile delinquency,  rock and/or roll and Stuff from Outer Space.
It's always hard knowing a scenario just from reading it, but these seem an interesting, if mixed, bunch.  There's also a brief over-view of the 1950s (in the US) and how one might set mythos RPGs there.
I read some very mixed reviews online, but at the moment it's in warehouse clearance for UK buyers, and worth the £7.34 they're asking for softback copy and pdf.  But you'll need the pdf - the reproduction of the (not great) artwork in the hardcopy isn't very good.
Currently Reading

Fritz Leiber, Swords Against Wizardry
After a tedious mountain-climbing story with a shaggy-dog of a climax (and which I was surprised to see was nominated for a Hugo Award in 1966), the heroes get down to some proper Swords and Sorcery adventures.

MR James, Collected Ghost Stories
What would the period between Christmas and New Year be without the genius of Montague Rhodes James?  Dull, that's what.
at 21:00