Goodreads, which I use to track these things, informs me that I read 46 books in 2020.  That's pretty good going - no doubt a result of Lockdown. By my count it's 27 fiction and 19 non-fiction, more of the latter than I expected to be honest.  For those who want the full list, I restarted a monthly round-up of all my reading in May 2020, so delve into the back-list.

In the past I tried to give my top-ten (sometimes giving separate lists for fiction and non-fiction), but I always found that tricky, so this year I'm again going to give highlights rather than shoe-horn things.

My first book of 2020 was a re-reading of Jonathan Strange and Mr Norrell, not a small undertaking but one that I enjoyed greatly.  It rates as one of favorite books.  At the time it came out, the merger of historical writing and fanasty was quite novel.  There have been many imitators since, but not many of them have been able to carry it off: the secret is that Clarke has masterty of both genres and brought something new to each of them.  I followed it up re-reading The Ladies of Grace Adieu, a collection of short stories set in the same universe as Strange and Norrell.

Strange and Norrell came out in 2004 and Ladies in 2006; fans had been impatiently waiting for the next work since then.  It came out in September 2020.  After avoiding reviews and other publicity, I read it in November.  My initial opinion of it can be seen here.  Suffice to say, I enjoyed it: it rates as my BOOK OF  THE YEAR. 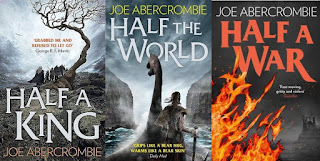 I'm a long-standing fan of Joe Abercrombie.  This trilogy, published in 2014 and 2015, was written and marketed as 'Young Aldult Fantasy'.  I'm not quite sure what that means, perhaps there was less gore and sex than in Abercrombie's other works, but they (and other 'adult' themes) were still there.  Certainly there was no diminishment in the qualtity of his writing.

I read them in March and would certainly recommend them.

Mainly Non-Fiction in April and May

April and May saw a few non-fiction books that are worthy of notice. 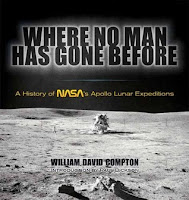 William David Compton, Where No Man Has Gone Before
This is part of the Official History of the Apollo Programme produced by NASA, focussing on the science programme.  As such, it might be expected to be quite dry.  Instead, Compton does a very good, readable job of explaining how the expectations of the science community were meet, dismissed or managed in the light the limits of enginnering.
Of particular interest is the on-going struggle over astronaut selection between those who primarily wanted the appointment of test pilots and those who wanted scientists on the moon.  Naturally, most of the hard science was planned for the latter missions, so the early cancellation of the programme saw much alteration of plans in order to get as much done as possible.

Peter Hunter Blair, The World of Bede
This is an excellent introduction to Anglo-Saxon England, religion and the life and works of Bede.
The book was first published in 1970, so I'm sure that it's been superceeded in many aspects.  But for someone who, like me only has a general knowledge of the subject, it was great.

J S Weiner, The Piltdown Forgery
This is another old book, in this case published in 1955.  The thing of note is that this is the first book-length account of the exposure of the fraud by one of those who made the initial expose in 1953.
Again, it might be thought to be a dry subject, but the fact that my copy is a 1955 edition from the old Boots Travelling Library, shows that there was huge public interest in the case.  It makes good reading as a dectective story, a study in vanity and hubris, and for those interested in 1940s-vintage forensic techniques.

Tom Shippey, The Road to Middle-Earth
There have been libraries' worth of books written on Tolkien of course.  The advantage Shippey has is that he knows and understands the influences on Tolkien and, unlike many of us, he actually understands the philology that is at root of his creative process (from 1979 to 1996 Shippey held the Chair of English Language and Medieval English Literature at the University of Leeds that Tolkien held in the 1920s).

Joan Druett, In the Wake of Madness
I first got to know Joan in the 1990s, when I could lay a tenious claim to being a maritime historian.  It was therefore a great pleasure to read this, her account of a 1841 mutiny on an American whaleship in the Pacific.  It was a great scandal at the time and did much to influence Herman Melville's writings (he was serving in the whaling fleet at the time).
Joan did a great job in ferreting out contempory accounts and documents, and tells a story of brutality and racism that was glossed over at the time and since, while at the same time telling us a lot about how whaling on the far side of the world shaped New England society.

Michale Chabon, The Amazing Adventures of Kavalier and Clay
This account of Jewish boys in 1940s New York fighting Nazis through the medium of comic books is a great read.  It won the Pulitzer Prize for fiction in 2001, and deservedly so.
I'm not a comic-book fan, but this is obviously heart-felt homage to the Golden Age.
J D Davies, the Matthew Quinton Series 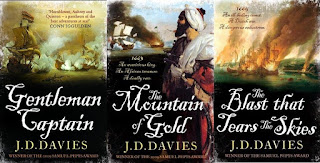 There is a a lot of naval fiction written, a lot of it fairly bad (and like bad science fiction it always seems to come in series) so, as a rule it's not a rabbit-hole I tend to go down.  However I made an impulse buy in a charity shop of Gentleman Captain, the first book in this series.  I suppose there were two reasons: first, because by being set in the Restoration Navy, it was a different period from the usual Napoleonic or Tudor tale; and, secondly, because I was vaguely aware of Davies as a respected historian of the period.  It was enough to pique my curiosity, and worth it.
The series follows Matthew Quinton, a member of an aristocratic Cavalier family - exiled during the Commonwealth - who return on the Restoration.  Matthew opts to join the Royal Navy and is appointed a 'Gentleman Captain'.  The series charts the (not insignificant) tensions between the 'Gentlemen' and 'Tarpaulins' - those who owe their appointment to the belief that the aristocracy are natural leaders and those survivors of Cromwell's navy who earned thier appointment through merit.
There are seven books in the series (plus two in a prequel series about Matthew's grandfather in Drake's navy): I've now read the first three (and am up to the Second Anglo-Dutch War and the Battle of Lowestoft).
Naval History
As anyone who follows this blog should know, I have an interest in naval and maritime history.  However, like many, that was initially prompted by accounts of Napoleonic Wars at sea.  Thus, apart from the obligatory books on the Armada or Samual Pepys and an interest in the exploration voyages of Anson and Cook, I hadn't read much of earlier periods.
Now one thing I was aware of from what little reading I had done, was that the Restoration was a fascinating period.  For anyone who wants proof of that, I'd point them to Claire Tomalin's outstanding biography, Samuel Pepys: The Unequalled Self.  Of course, the resolution of any civil war is bound to be tricky, but the sheer amount of intrigue and politicing during the Restoration and the Glorious Revolution is staggering.  That one of the reasons the Davies' Matthew Quinton series is such a good read.
So, I've decided to read up on the subject.  As a result in the latter half of 2020 I read a number of books on the navy in the period 1640 to 1740.  I don't think any one of them deserves pulling out for this hightlights post, but it was a significant feature of my reading in the year.
Ghost/Horror Stories

I've never been what you can call a horror fan, but over the last year or so, I've become interested (primarily through RPGs based on the Lovecraft Mythos) enough that I read enough during 2020 for it to be worth mentioning.
All four of these books are worth recomending.  The King in Yellow is a mixed bunch, my view from May 2020 is here.  The same link gives you my take on The Tales of Unease; basically that familiarity with Sherlock Holmes makes one forget how good a writer Conan Doyle was and all the other stuff he wrote.  I've not read a great deal of Lovecraft, but if it's all of the quality of The Case of Charles Dexter Ward, I've a treat in store (sadly, from my other reading I know it's not).  For me, however, the Master is MR James.
at 16:37