Following the events of the last session, the Plan was to return to the stash of loot we’d been unable to carry out.  If it was no longer there, we could carry on and complete the original mission of jacking the Butch Killers’ muscle car.

In order to add extra carrying ability and firepower, Mieville and Wispa each hired a retainer.

Almost as soon as the Crew entered the Wastes, they spotted a drone flying in circles, seemingly diorientated.  As we debated whether to shoot it down or use Mieville’s jamming tech to drive it away, we apparently registered on its sensors, and it came towards us.  We identified it as a civil delivery drone as it swooped down and dropped its load, rather too close to Polecat for comfort.  Wispa shoot it out of the sky.  As the infiltrators warily checked the parcel, Polecat examined the wreckage to see if she could salvage anything of use (she couldn’t).  After a lot of prevarication, the parcel was opened, only to reveal a decade’s-old food delivery.
In the next block we spotted another group of wasters, but were easily able to skirt around their camp without being seen. 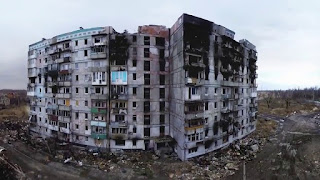 And so, we were at our target – the ruined residential building where we had found the stash.  We carefully retraced our steps through the building and were able to reach the apartment without any trouble.  Once there, however, we encountered the guard-dog we’d met before.  This time it was far less friendly.  It proved much tougher than we expected.  Mieville’s attempts to subdue it quietly failed, and after a short close-quarters struggle it was killed in a burst of gunfire. 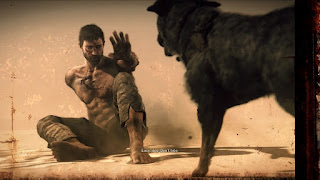 The stash wasn’t where we’d left it, but we were able to make out drag-marks into the bathroom.  Listening at the door revealed nothing but the sound of a fan so, after checking for booby-traps, we went through.  Too late we realised that the noise was in fact a drone's engines.  And this one was combat-equipped.  But again, co-ordinated firepower proved successful.

We were now in possession of the ten sacks of loot we’d come to collect.  We began our slow, heavily-ladened way back.

Paranoid with so much loot in our possession, we were on the lookout for any trouble and so were again able to notice the crew of rival Wasters before they saw us.  We took up a defensive position, with Jiro, Snips and Wispa climbing up inside buildings to get the benefit of their sniper abilities.  The initial plan was for Mieville, Polecat and Melodie to shout a warning and intimidate the other crew into leaving us be.  However, everybody was on heightened alert, and instead as soon as the gang came into view, Mieville opened fire.  It was a turkey-shoot.  Before they knew what was happening, all five members of the rival team were dead.  We stripped them of their weapons and ammo and moved on.

We were almost in the Safe Zone when we spotted a lone figure.  This turned out to be one of the lone hermits who wander the Wastes.  This time we did opt for parley and intimidation.  He was almost too crazy and paranoid for it to work, but he reluctantly and warily moved on, allowing us back to safety without another death on our hands.

The pay-out was good, but the ambush of the fellow Wasters neither of our retainers didn’t go down well with our retainers, who both left us as soon as they were paid.

We were extremely lucky in this session.  In contrast with the previous three sessions (which had each seen two or three PCs killed), not one of us was wounded.  Our combat dice-throws were particularly good – the combat drone didn’t get chance to open fire, and the Wasters were wiped out in our surprise round.

Pay-out was good, both in terms of Dollars and XP.  Wispa was able to move up to Level 2, and we established a pool of looted equipment for future use.  We were also able to buy a suite of Cybertech enhancements that was on offer in Club Lavender for future use.

However, there may be some repercussions.  Polecat’s alignment didn’t allow for her to stay with us after the massacre (though she waited to get paid, and took some of the Waster’s weapons when she left). 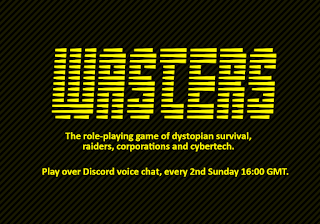