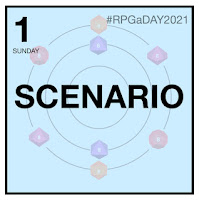 Day 1, and as I said in my Day 0 post, I've been caught hopping.  I have nothing prepared.  This is going to be even more stream-of-consciousness than normal...

When I think 'RPG Scenario' my mind goes to one-shots.  I know this isn't really what the word means in this context, and that a published setting can also fit in there, but because I tend to think of these as 'campaigns', one-shots and 'short-campaigns' are what I'm going to talk about.

I'm very lucky in that since I returned to role-playing two or three years ago, I've fallen in with a couple of regular crowds.  One, at my FLGS, plays the Barrowmaze mega-dungeon as an open table.  The other, which is an on-line crowd (the membership of which is fluid) I've met since lock-down.  In neither of these cases do we often play one-shots.

But thinking off the top of my head, there are a few one-shots I've played in the year which I don't count as scenarios - for example, the Flash Gordon using the Index Card RPG and the attempt we had at playing Under Hill and By Water.  Is this because they weren't following a 'published scenario'?

And in the Wasters games that are my current expression of the hobby, we have a 'job/mission' to go out and complete, as we did when we were playing Odd Sci-Fi.  Why don't I see these as 'scenarios'?  They obviously are.

There are definitely some games I've played that I do consider 'scenarios':-

None of these were less enjoyable for being a 'scenario'.

So to me, a scenario is

Hm, if I'm not careful I could start writing about the difference between a sandbox and a railroad.  And that's a more involved thing.  Certainly you can have a published sandbox, and not all scenarios are railroads.
Perhaps it's because of the nature of the games I play and the people I play with - the OSR is supposed to free-flowing and to abhore railroading - that I don't think in terms of scenarios when I look back at the sessions we've had.  No doubt I am kidding myself!
I think I've talked myself into the conclusion that in RPG terms I equate 'scenario' with 'published module'.
The dictionary definition of 'scenario' is a description of possible actions or events in the future, but in this context, my mind is latching onto the subsidiary meanings: - a setting, in particular for a work of art or literature and a written outline of a film, novel, or stage work giving details of the plot and individual scenes.
I've never tried to write a 'scenario', but I have had a go as creating a 'setting'.  I see that one of the words of the month is Inspiration, so I shall talk about it then.
#RPGaDAY