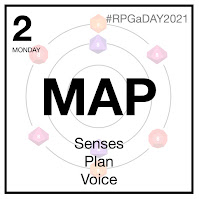 Today's word is an easy one for me as it allows me to rehash one of my favourite RPG stories.  When my FLGS group celebrated the first anniversary of our delve in Barrowmaze I decided to have a hard-copy made of the progress we'd made.

I was annoyed when Snappy-Snaps got in touch to tell me that it wouldn't be ready at the time they'd promised, and thus I'd have to pick it up on the way to the session.  When I got to the printers, it turned out that the lad who'd took my order had confused centemetres and inches.  That ruler lying on the map is a foot long...

Last week, someone posted on the Old School Essentials FaceBook group about all this.  "Why do you grumpy old sods hide things from your players?" he said*.  "I give my players the whole map and let 'em at it!".  Well good for him, and good for his players,  That's the game they want to play.  Exploration (of the 'dungeon') isn't their priority.  But I found it a bit odd.  I'm old-school in my approach.  I like mapping and record-keeping.  Why is that?

*Not really, but words to that effect.

Well there are those who will insist* that Dungeons & Dragons is primarily an exploration game (and by that they don't mean exploring one's character or motivations!).  So, when played in that Old-School** way, mapping is an essential part of resource-management.

**Note I use the initial capitals here that I avoided in the previous paragraph.

For me, it's because maps and imagination are closely linked.  I've posted before about R L Stevenson's 'Land of Counterpane'.  Technically the poem's not about maps but the link is there; and I'm not the only one who has lain in bed looking at cracks in the ceiling and instead seen rivers and coasts.

My introduction to fantasy was Narnia.  Not The Lion, The Witch and The Wardrobe, but The Voyage of the Dawn Treader.  I picked up a copy of that in the school library because I liked the picture of the ship, but it also had a map!  Even better was the one in Treasure Island which had all sorts of strange symbols on it.  I've always loved coasts and islands.*  The first book I bought with my own money was Enid Blyton's The Island of Adventure**.  For years afterwards I'd doodle island maps.

*Inevitably our holiday desitnations when I was a kid.

**In a secondhand bookshop opposite Exeter Catherdral while on one of those holidays.  I must have been about 8.

My next literary map was of Middle Earth, and I'm sure I don't need to write much about that one.*

*Partly because once one starts, where do you stop?

Of course, it all got rather out of hand in the fantasy genre.  All the sub-Tolkein writers determined that books had to come in threes*, have over 800 pages* and must start with a map.  Joe Abercombie** famously reacted against that and resisted having maps in his books (but they're just too damn useful!).

**Who I rate very highly.  Follow the link and read his eloquent and amusing dismissal of crap maps.

*No accident that I became an archivist then (and though I was bad at it, that was solely due to vice and laziness).

After posting this, I was reminded of my first book-with-a-map.  How could I forget the Hundred Acre Wood!  My Mother used to read Winnie-the-Pooh and The House at Pooh Corner to me in bed.