By a pleasing coincidence this Dr Who Wednesday falls on the 53rd anniversary of the first broadcast of the show.

I should have something interesting and erudite to say about it all, but frankly I haven't the energy to write anything sensible.  Instead, I'll point you to BBCAmerica Doctor Who's-Day round-up - a blatant rip-our of our own dear Dr Who Wednesday.

After last week's lament that Crooked Dice's Not-Doctor-Who range had be pull from the shelves before I'd managed to stock up, I managed to pick up three of the companions. 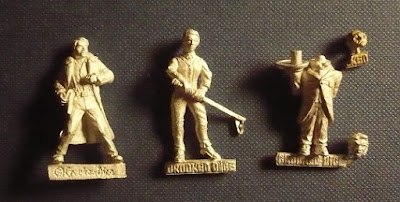 Now, I know a couple of my readers don't approve of Capt Jack or the Paternoster Gang for introducing sexuality to the programme, but that ship sailed once they started allowing snogging in the TARDIS.  Personally, I find Capt Jack a great character.  I enjoyed Torchwood greatly before it got too dark in the last two seasons.  I have my reservations about how Sontarans are now portrayed as comedy characters rather than menacing ones, but I must admit that Strax is written and acted very amusingly.

The News We've Been Waiting For

A little later than in previous years, the Seventh AHPC has been announced: it will be running from 20 Dec to 20 Mar.  For full details see here.

This is one of the highlights of my hobby year, and although I'm not a very productive or particularly talented painter, I find it very enjoyable and great fun.

I'm probably going to stick with my usual plan of looking at the lead pile - so more Doctor Who, some Pulp, and perhaps some Frostgrave characters.

The theme this year is "Camaraderie and Teamwork" and in a unusual twist Curt is asking us to do just that: to pair up for the Curtgeld.  Do any of you want to partner me?  I'm open to suggestions as to theme, etc, bust ask that you remember my limitations!  Get in touch at diplomatist2 AT gmail DOT com.

Equally, anyone up for a Doctor Who side challenge?
at 13:40 2 comments: Links to this post

First up is Bad Squiddo Games' Ghosts of Gaia.

The likelihood is that you don't need to be told of this, given that it's 733% funded.  In fact, when I first visited 15mins after the launch it was 115% funded.  Post-Apoc isn't really my cup of tea, but as I'm a supporter of Annie's efforts and know the great service she provides, I present it for your consideration. 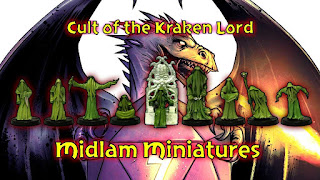 Secondly, is a Kickstarter that started earlier today.  It's from Midlam Miniatures and is the Cultists of the Kraken Lord.  Some of you will remember that I subscribed for their apprentice wizards (which are now available for pre-order on their website) and which arrived dot on time in fine order. 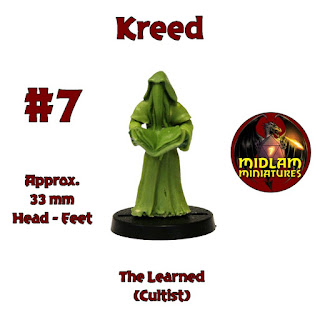 Now tentacly cultists!  That is down my street!  So I've signed up. 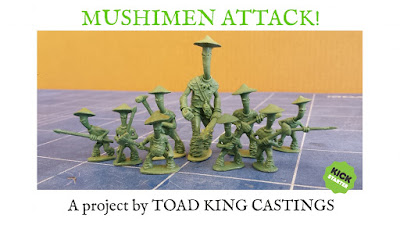 And having done that, Kickstarter directed me to Mushimen Attack! by Toad King Castings.  This looks intriguing, but I think I'll leave it for now.
at 14:38 1 comment: Links to this post

Last week Annie from Bad Squiddo Games announced in her FaceBook group that she wasn't going to include the Not-Doctor Who figures on her new website, and she was thus selling off her existing stock,

I picked up these two - a Crooked Dice Not-River Song and a Heresy Not-Amy Lake. 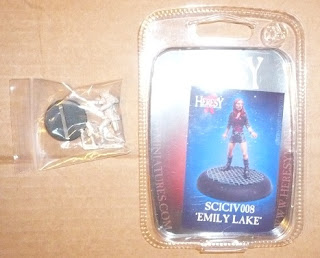 Being a little dim, I didn't twig that Crooked Dice and Heresy had each removed their Dr Who lookie-likies from their sites.  I should have stocked up as soon as I realised that there were likely to be Cease and Desist letters!  I notice however, that Heresy have kept their "Emily Lake" with the simple expedient of changing her name and colour of hair.  I must stock up on Not-Firefly and Not-Blake's7 figures...

As suspected, news from Warlord Games is coming thick and fast as Christmas approaches.

The Silents have been released in sets of three lead figures for £11.99.  And we've had a a teaser pic of plastic Cybermen. 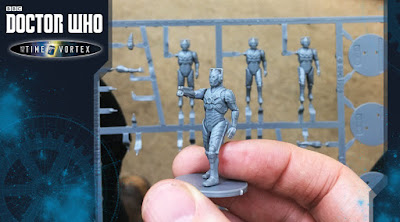 These leave me a little cold, but then I'm not a great fan of the 'new' Cybermen.

I'm doing this special edition of Dr Who Wednesday because people keep asking what I make of the Warlord Games releases.

Let's get two, much-mentioned, points out of the way first


As to the first, well, that's the way it is.  We'll have to get used to it.  The same can be said for the second point.  Honestly, the ones released so for aren't that much dearer than Crooked Dice.  That will be alright for the 'character' figures.  We've not yet seen the release of any of the plastics, which should be more reasonable sonic screwdriver fodder.

Releases and news are coming out now, presumably in time for Christmas. 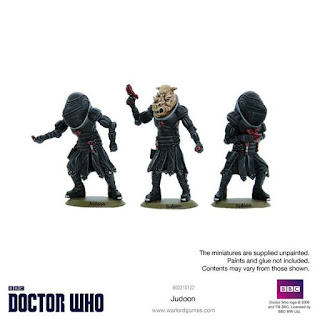 
I've shown pictures of the Doctor sets before and mentioned that some have criticised the sculpts, both for the non-dynamic poses and the likenesses.  Personally, I don't think them too bad and that there's a lot of 'nay-saying' involved in these criticisms (I should declare I left the Doctor Who Miniatures Facebook group because of the negativity). 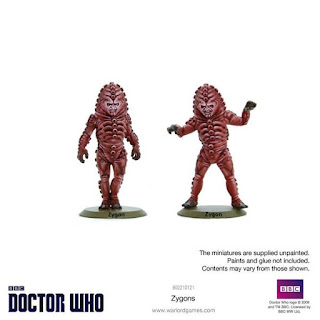 As to the Jadoon and Zygons, the likenesses seem fine to me.  The poses seem fine - I don't know how variable they are: we're told that assemble is required - will that leave scope for tweaking with the pose?  Equally. I don't know why we get three of one and two of the other - perhaps the answer lies in the mechanics of how each species operates in the game.

The choice of subjects has been criticised by some who like "Classic" Who - but we shouldn't forget that the Zygons first appeared in 1975 with Tom Baker.  Judoon, I can take or leave - they seem merely act as spear-carriers.


This week's big news has been the teaser photos of the Daleks.  Now, here Warlord are on a bit of a loser, as we've been spoiled by the 'free' Daleks that have appeared with the magazines - ropey perhaps, but they paint up nicely.  If were going to be expected to pay money, we want something better! 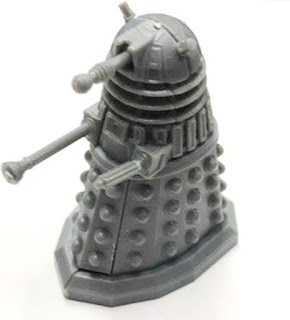 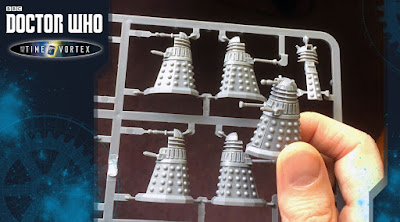 Well, they're certainly better than the 'free' ones, but as we don't yet know the price, we'll have to wait and see if they're worth it.

The spru pic has had some people worried.  These are three-part no-glue-required models.   Because the skirts, collars and heads are all together there will be no choice in pose.  Daleks aren't the most dynamic of beasties, but sticking to the fore-and-aft look is a little limiting.  It's also been pointed out that this choice means that one can't interchange heads, skirts, etc to make different Dalek varients.

In summary, I'm still firmly in the 'wait and see' camp (especially wait and see what comes in plastic and what in metal).  I see nothing wrong in what Warlord has done, and welcome the arrival of a new range of Who miniatures.

Warlord has a dedicated website for the range.  If your interested in the latest news, check there.