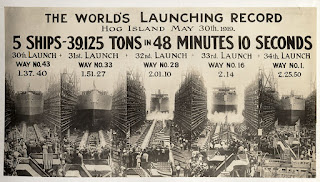 OK, so having decided to make an effort to play something on or before International Naval Wargames Day I was left with the minor problem of not having any teenie-tiny ships.

Now, for anyone else in this situation, I'd recommend printing out some of the free images from the Junior General (either top-downs or waterline images) or perhaps buying some of the top-downs from Topside Minis.  However, I don't currently have a working printer and don't want to wait for the transatlantic post (however tempting it it to refight the Battle of Coronel for under ten quid!). 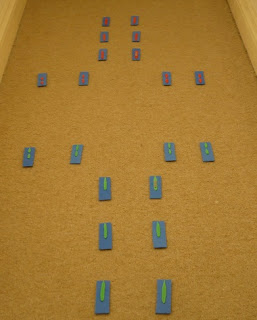 So, half an hour with the old EVA foam sheets, rounded scissors and superglue, and I have the nuclei of those old adversaries: Red Fleet and Green Fleet.

Now I could waffle on about the usefulness of having non-scale- and non-unit-specific counters instead of beautiful miniatures, but the brutal fact is that this the limit of my crafting skills.  I wanted something quick and dirty for what is in effect a play-test of rules.  For me the important bit is knowing which way the ship is pointing, and these will do.  The space abaft of the ships (d'see what I did there!) is to add some form of identifying mark.  At the moment I'm thinking of a sticker that can be quickly removed.  One of the other advantages of EVA sheets is that they will take drawing pins, if that's how I choose to mark damage. 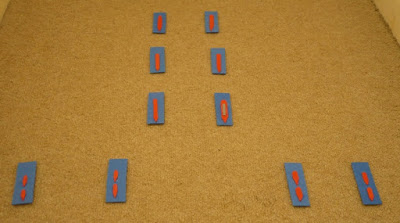 Another advantage is that having scissors and glue out is getting one step closer to getting brushes and paint out...
at 16:07 2 comments: Links to this post 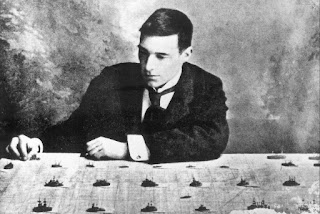 Apparently, Sunday 6 August is the inaugural International Naval Wargames Day (it being Fred T Jane's 152nd birthday).  The idea is that around the world, wargamers sit down and play a naval wargame in honour of the old man.

Naval wargaming (like naval warfare) covers a huge spectrum, from full-fleet battles down to single-ship actions.  Settings can be historical, counter-factual, fantasy, near-future or far-future.  They can be played with miniatures, as pen-and-paper exercises, or as boardgames.  Some rulesets are notorious for their complexity, whereas others can be written on a single sheet of paper (some of the latter can be downloaded very cheaply or for free at the Wargame Vault).

So whether you fancy getting hundreds of teeny-tiny ships out and re-fighting Jutland, modelling Amethyst's dash to the sea, or raiding the Lego box to have pirates boarding a fat merchantman, join in!  It should be fun. 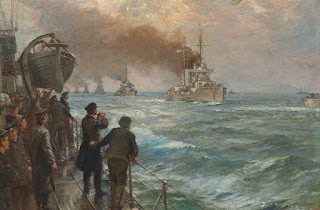 This may be just what I need to spur me on to doing some actual gaming.  Being a magpie I have acquired several rulesets (mainly the aforesaid free ones from the Wargame Vault).  At the moment I'm thinking of trying out Bob Cordery's Portable Naval Wargame and am tailoring a free set I obtained from the Topside Miniatures website to a pre-combat-aircraft setting.  Phil Barker's Damn Battleships Again! has also been suggested.  But if anyone knows rules better suited for solo play in this period, please let me know.

I have a week to choose one and work out how I want to represent the units involved...
at 11:05 No comments: Links to this post

As we cone up to the fifth anniversary of the start of this blog, I'm seriously considering its future.

Given that my last post was on 27 June, and the one before that 10 May, it's evident that I've run out of steam blog-wise.  That's a shame, seeing it's an activity I really enjoy.  Even writing these few sentences seems good and is enough to make me feel it's worth the effort.  When I started the blog I was in a very bad place: a year after my overdose and coma, I was still very depressed, drinking and soon to loose my job.

Like many others who blog, when I started I didn't really expect many people to read it, or for it to go on very long.  It was merely an intellectual exercise in writing for writing's sake: so I didn't loose the habit. Reaching out to the world was a consideration, but I didn't expect to have regular readers or any feedback. But through the blog I've met a long or interesting people (both in person and virtually), developed new interests and it's prompted me to launch Diplomatist Books.

All in all, blogging has been an overwhelmingly positive experience for me.  I'm going to make an effort to keep it up.
at 17:35 8 comments: Links to this post