Last week the charity shop provided a Gaming Hat, which tickled many of you.

This week it came up with Shoes... 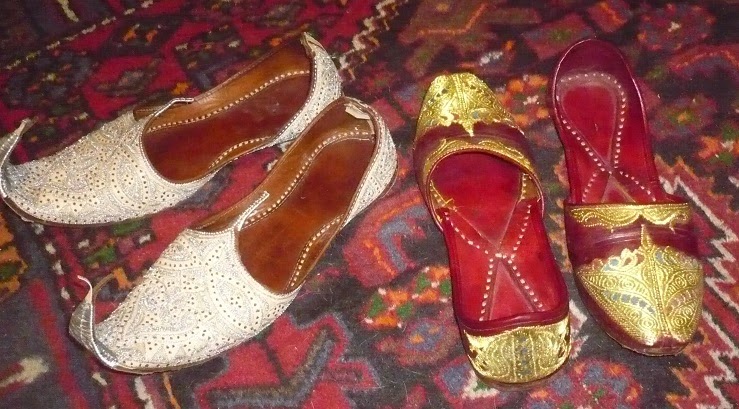 Sadly, they don't fit me.  Happily, they fit The Wife.

So I don't think she'll let me fill them with tobacco and keep them on the mantelpiece...
at 18:08 6 comments: Links to this post

Yesterday I sent a public Thank You to my Secret Santa.

Today it's my pleasure to say thank you to my Santa Clause benefactor - your parcel arrived safe and sound this morning.
at 13:20 3 comments: Links to this post

On it was written 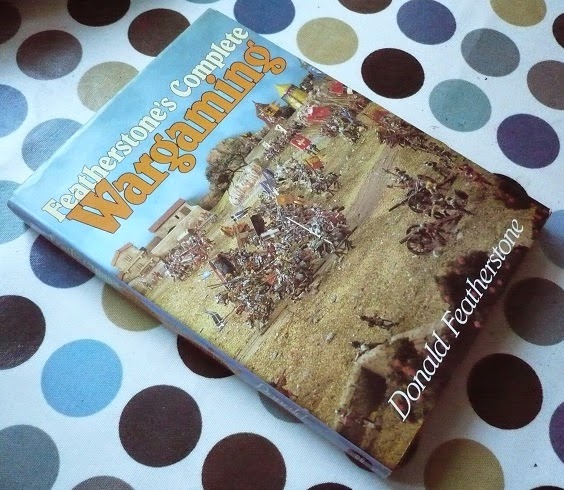 You may remember me complaining three weeks ago about the non-appearance of the Daleks I'd ordered from BTD.  Well they arrived today. 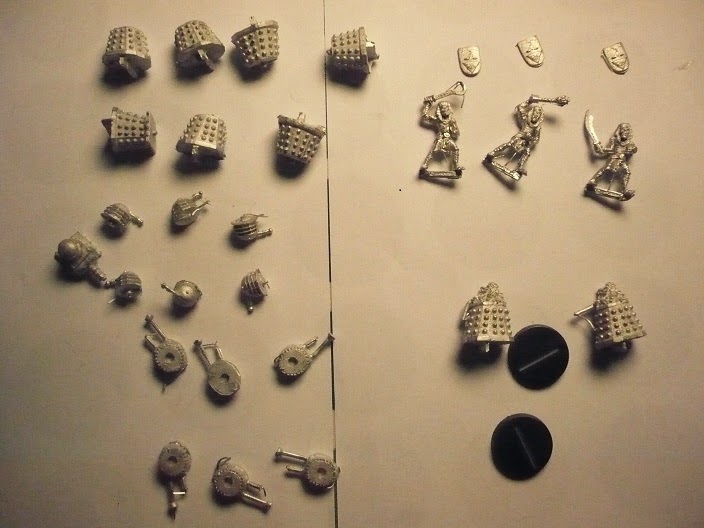 I must say that, given the wait and what I'd paid with them, I'm a little disappointed - they're quite rough and will need quite a bit of tidying up.

So not quite the 'Oh Shiny!' response this time.

As if to compensate, I picked up some very cheap goodies in the Charity Shop... 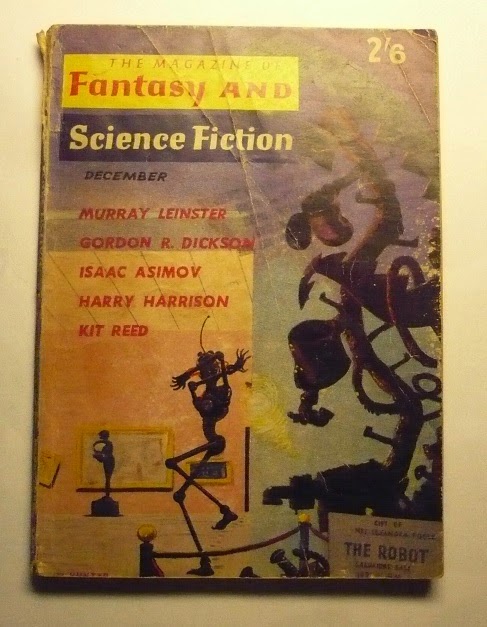 This weekend I need to close the shed down for the winter - putting the over-wintering plants in there after first getting out everything I need for the Painting Challenge. 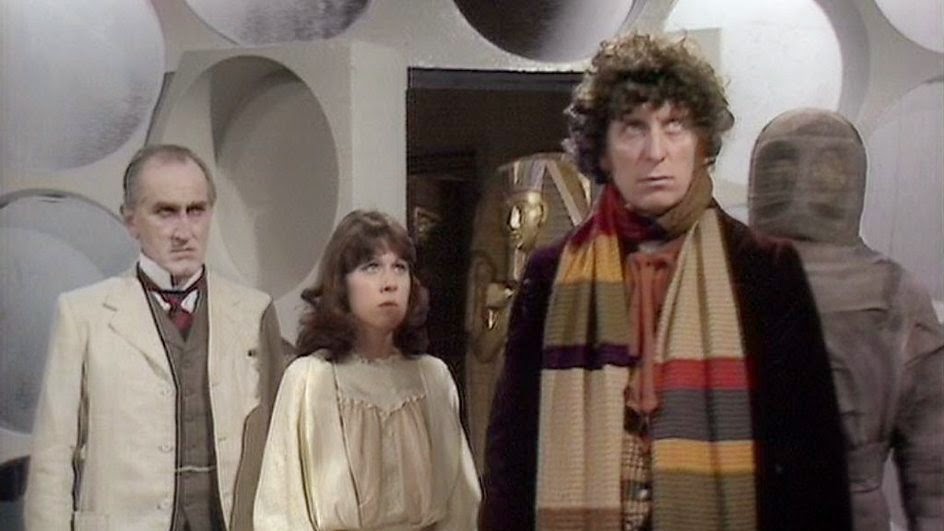 For those of you in the UK, 'The Pyramids of Mars' will be shown on the Drama Channel tomorrow afternoon.

They're working their way through the doctors - I saw Hartnell in 'The Aztecs' (which wasn't as creaky as I expected), missed Troughton and last week enjoyed Pertwee in 'Spearhead from Space'.


Very little news on the play-by-blog front.  Last week I was knocked out of Clint's 'Blood, Bilges and Iron Balls' game as three Spanish ships blasted away at HMS Inconsistant.  She made a good account of herself, but in the end I took too many damage points to the crew.

I enjoyed the game, and will certainly play BBIB again should the occasion arise.  Clint has done/is doing a splendid job in running such a fine table.

The state of my progress in The Padre's Diplomacy game is a top secret, but suffice it to say that the knives are out now and the blood is flowing...

R.W. has published his draft rules for his Old West game, and they're looking good.
at 16:55 12 comments: Links to this post 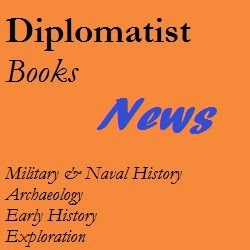 Those of you who have been over to the website and looked at the booklists there will know that they're a little clunky - they're 30-odd page pdfs.  While this is fine in some respects, it's not terribly user-friendly.

At the end of September therefore, I bit the bullet and signed up with AbeBooks.  You can now go to our storefront there and either browse or search our stock.  This also allows for photos of the books, so you can see what you're buying, and electronic payment.  If you want, you can also buy from other dealers at the same time.

I must admit to  some reservations in competing with the 'Everything $1.00' crowd, but our policy of only having decent titles in decent condition is paying off and AbeBooks has giving us a big boost in trade.  Try it and see!

Important.  If you want to redeem a token, or take advantage of a special offer from this blog or FaceBook, do not order via AbeBooks, but contact me directly. 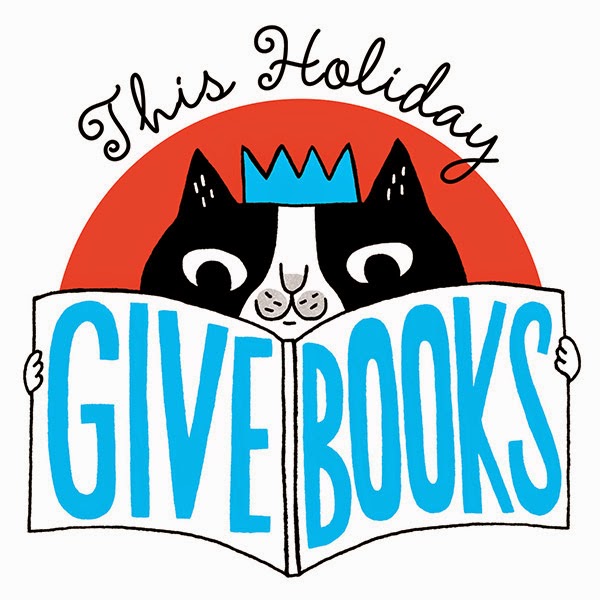 As we know, books make the best gifts (Oh yes they do!), but it's often hard to choose for someone else.  If you want to give someone a Diplomatist Books gift token, drop me a line.  We'll sort out the details and may be able to put together some kind of suitable e-card.

And taking of gift tokens, there's still time to buy tickets for the raffle in support of the Royal British Legion being run by Itchy of Wargames and Walking - there are scads of prizes (even if you don't want our gift token).

Books of the Week

An aviation theme this week, I think...


Capt Duncan Grinnell-Milne MC, DFC* served with the Royal Fusiliers before joining the RFC becoming an Ace (and prisoner of war). 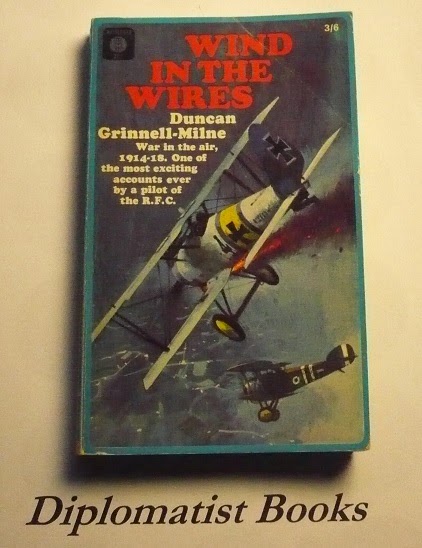 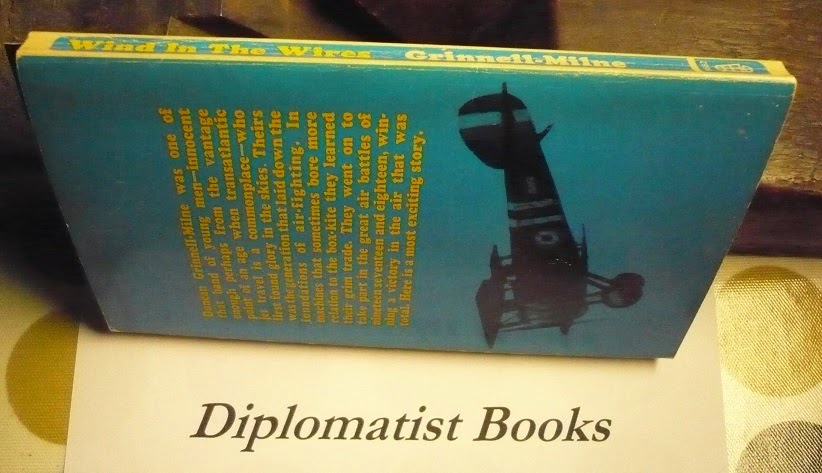 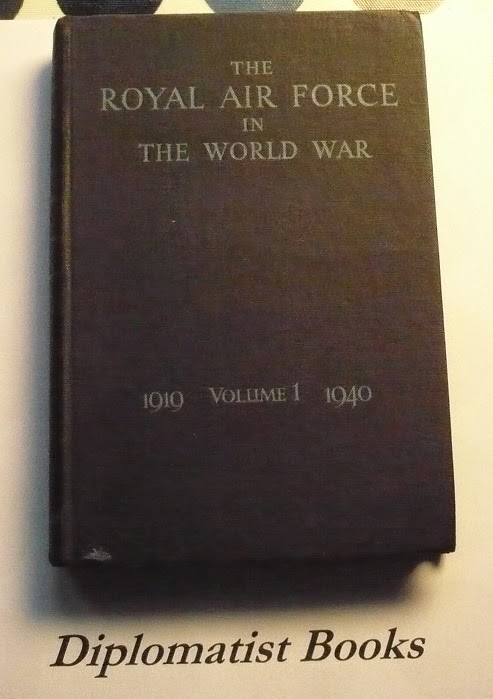 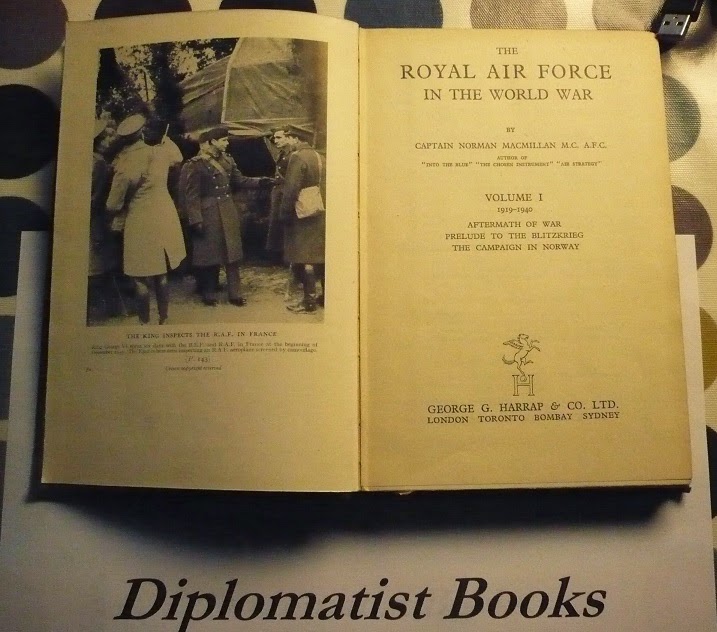 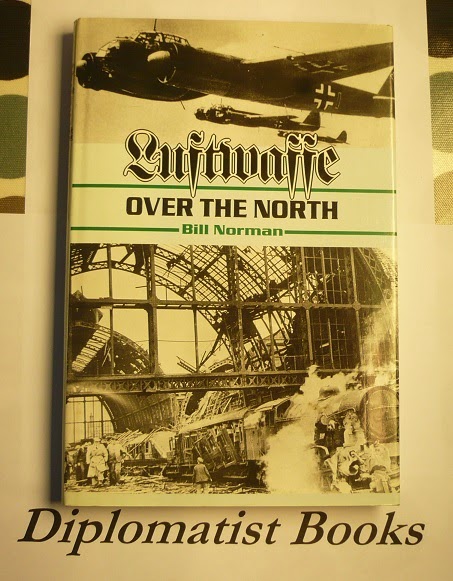 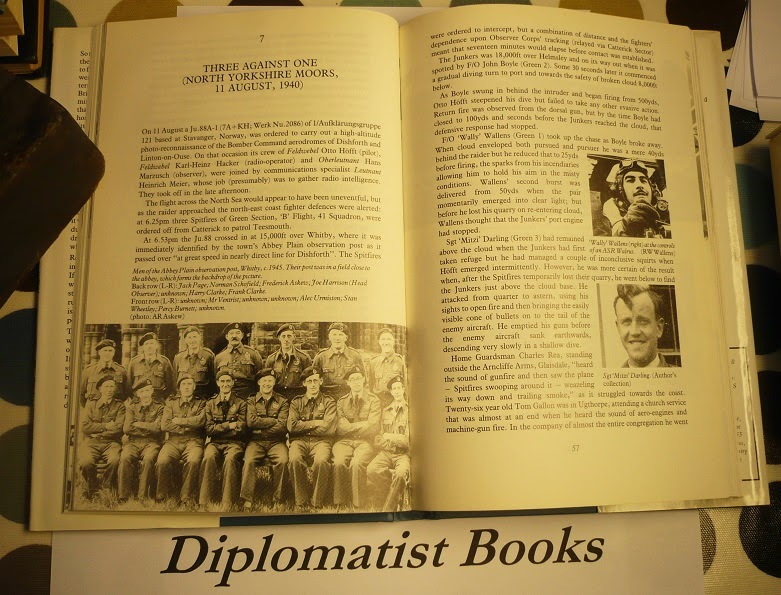 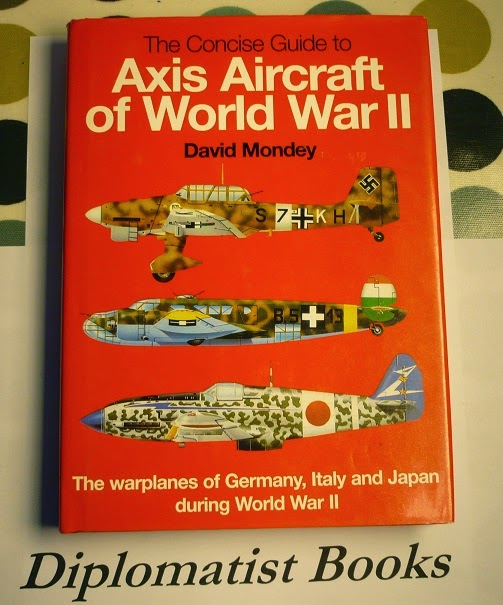 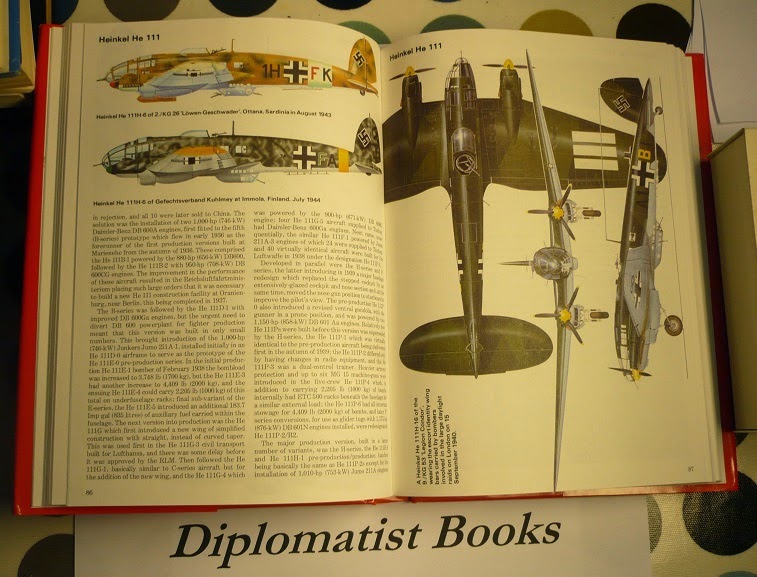 Welcome to Jeff M of The Lair of the Evil DM 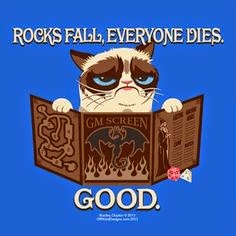 Nipped into the charity shop this afternoon and, among other things, bought some things that might be of interest to readers of this blog - 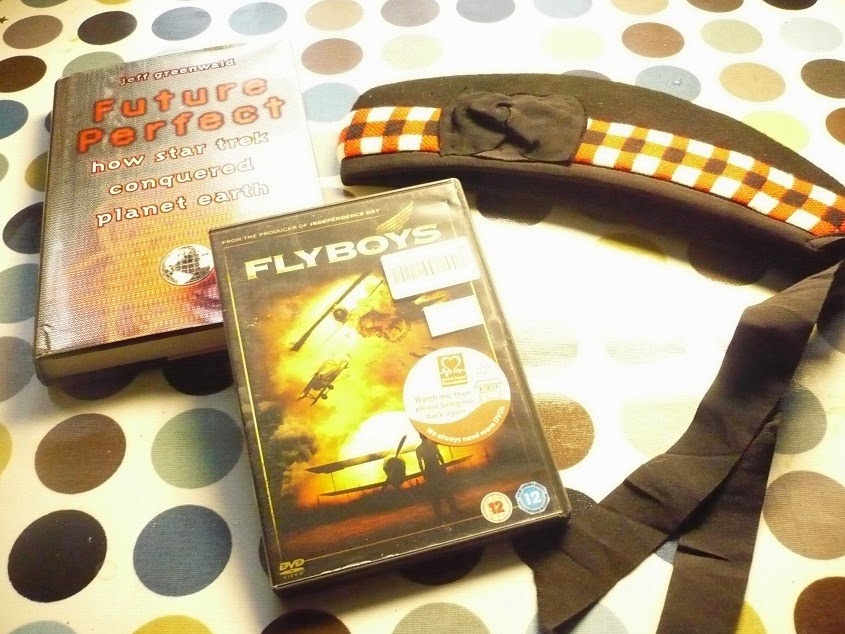 The Glengarry joins my small collection of gaming hats - which sadly won't stretch to this one...

25 years ago this week I remember watching the TV with my parents and us saying that it was one of those 'history-in-the-making' moments (with a nephew looking at us thinking 'What are they talking about?').  I also remember a 1987 university tutorial where the tutor asked whether Germany might be reunified in our lifetimes...


The Germans have partied in their own way, but for me it's an excuse to celebrate the end of Mutually Assured Destruction* (which bizarrely, I've seen celebrated this evening on Facebook).  All in all, this is an excuse to post The Ode to Joy...

and remember that it became The Ode to Freedom...


* The yoof of today talk about 'Living with the terrorist threat'.  Listen: 'Mutually.  Assured.  Desruction.'
at 18:55 3 comments: Links to this post 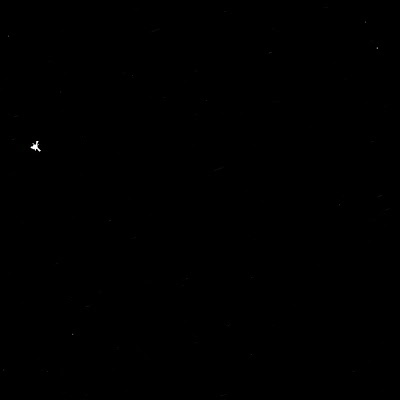 The Philae lander has left the Rosetta probe, which photographed it on its way to the comet 67P/C-G. 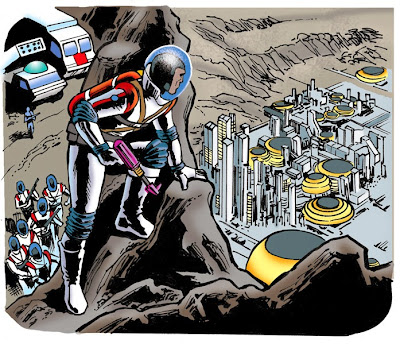 Now, as will be apparent to regular readers, I'm quite keen on pulp and retro sci-fi (or AtomPunk even).  I was interested therefore to read a post on the League of Extraordinary Gamers blog about a newish Kickstarter Assault on Fortress Moon. 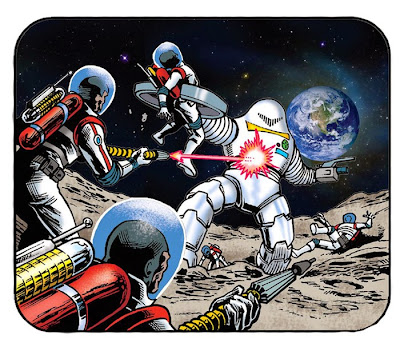 I'm not going to go into much detail as the LXG post and the Kickstarter page does that, but it does look interesting.  The artwork and fluff seem good.

First, thank you for the kind words and congratulations about reaching the 100K milestone.

Secondly, a big welcome to new follower.  Sander has a couple of blogs

As I said yesterday, I won't have a give-away for the 100K, instead I'll do one for the 100th follower (Sander is the 93rd) - which seems a more 'real' achievement. 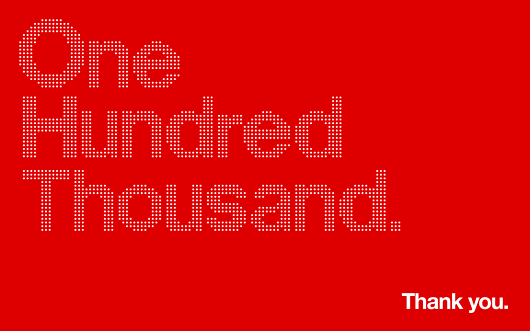 Just a quick post to note that the blog counter passed the 100,000 mark this afternoon (in part due to a peak of interest in Admiral Sir Christopher Craddock this weekend).

I probably won't do a give-away just yet (it's not too long since I did the last one), but I'd like to thank everyone who has visited and those who have left comments since the blog was launched in Aug 2012.
at 20:11 13 comments: Links to this post 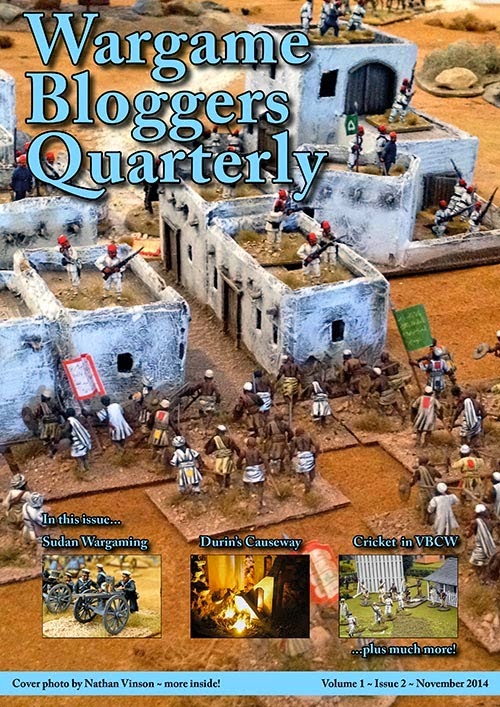 The second number of this free e-zine is now available.  It's produced as a labour of love by a group of wargaming bloggers and I can only stand amazed and impressed with the amount of work and cat-herding that must be involved in putting together such a quality piece of work.  The contributors and editor are to be congratulated.

I'm not going pretend I've read it yet. but it looks every bit as good as the first number.

If you think it is missing something or could be improved, why not put something together for Issue 3? 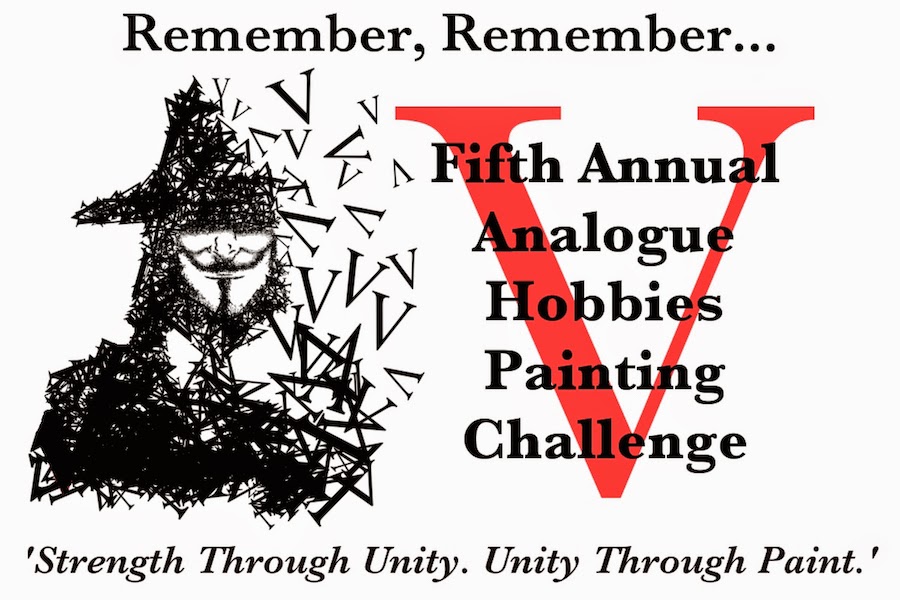 The nights are drawing in (here in the northern hemisphere anyway), so it must be time for another landmark in the online wargaming community: the Analogue Painting Challenge.  I've been looking forward to this!

Curt has announced this year's challenge with the theme of 'Anti-Heroes, Rogues and Vagabonds' (wonderful for a Pulp player!) and invited participation.  He's hinted at some changes and told us of a whole new range of prizes.  This year's bonus themes have already got me scratching my head.

I'd encourage anyone interested in taking part to do so.  Last year was the first time I'd entered and I enjoyed it greatly, having fun and learning a lot on the way.  Those interested in the leader-board aspect of it will want to know that some of the big-hitters have already indicated they won't be taking part.

This month must be... 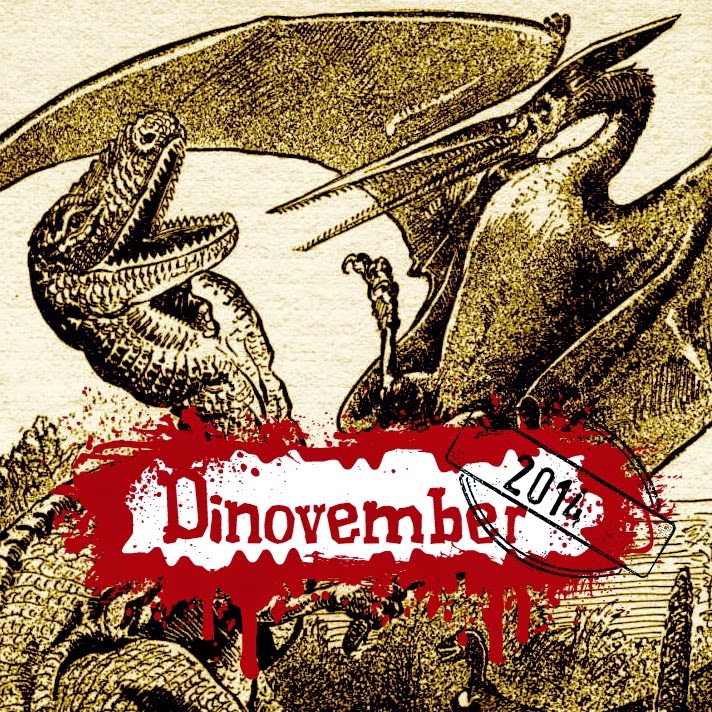 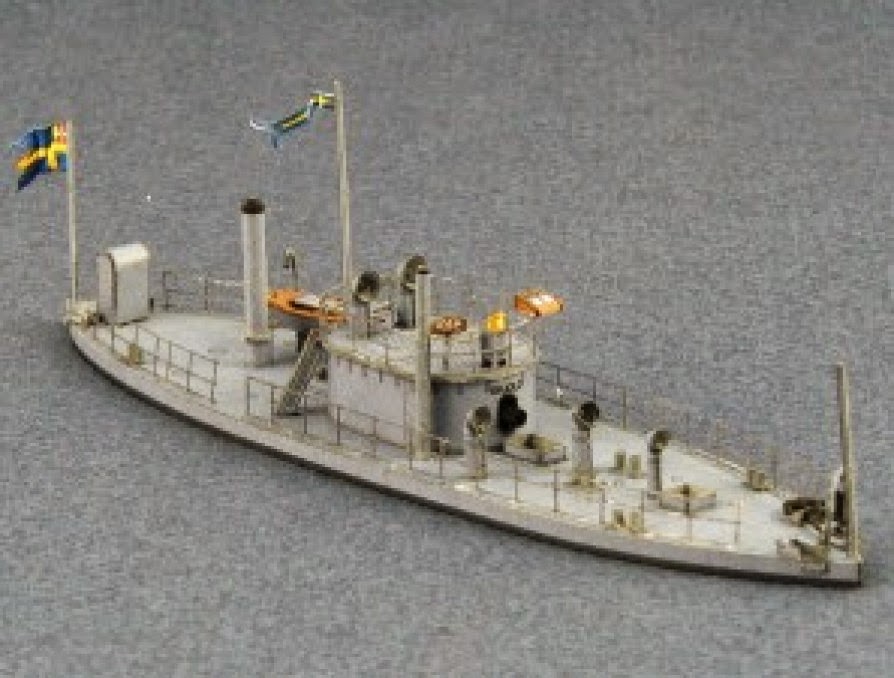 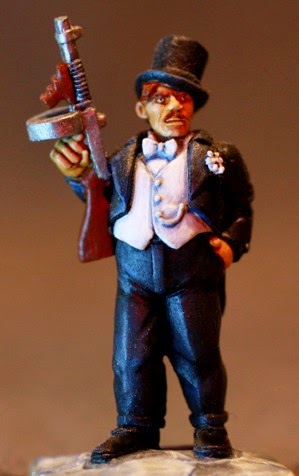 It was been a bad week for manned space exploration with the explosion of the Antares rocket intended to re-supply the ISS and the tragic crash of the Virgin Glalatic SpaceShip Two.

These have naturally thrown light on the safety aspects of space travel - with many pointing out that the pilot of the VSS Enterprise was the first fatality in spaceflight since 2003, and that the development of supersonic flight was much more risky.  One aspect that is more interesting to me is that these were both aspects of the long hoped for transfer of space exploration from government organisations to private enterprise.  It remains to be seen how the crashes will affect that transfer (there is an argument that private enterprise is more capable of getting over a disaster than government organisation - witness the paralysis that struck NASA following the Shuttle disasters).

Despite these set-backs, it is clear we are in a golden age of space science.  Stunning discoveries that would have been front-page news a few years ago are now normalised (New planet anyone?  Yawn!).

Photos such as the ones below were the stuff of dreams and sci-fi, but now come in every day.


The story of the European Space Agency's rendezvous, stalking and landing on a comet is remarkable.  When was the last time the ESA was ever made headlines?  They deserve them.

On 12 November, the lander Philae will leave the Rosetta spacecraft (which was launched back in 2004) and land on the nucleus of the snappily-named 67P/Churyumov–Gerasimenko, delivering 25kg of scientific instruments.  That will be a truly momentous occasion.

When Rosetta was launched it wasn't certain whether there would be any nucleus of substance to land on, or whether it would have the consistency of  cigarette ash.  But then again, in the 60s there were similar concerns about landing on the moon.


What then, will you make of this? 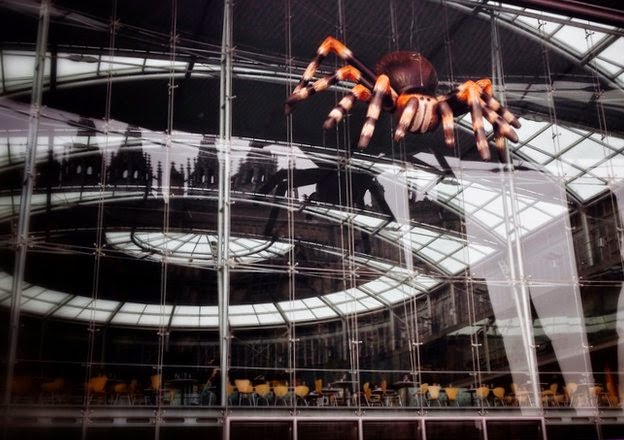 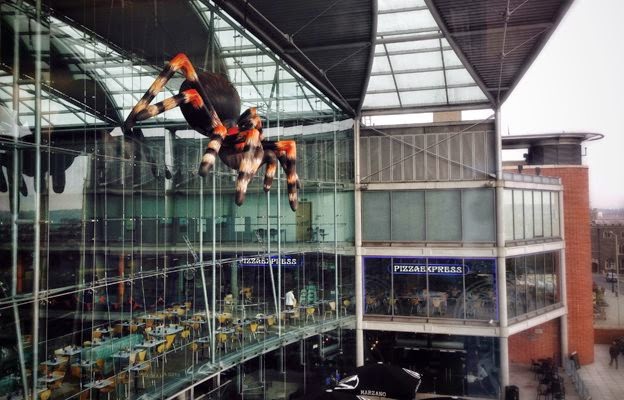 Email ThisBlogThis!Share to TwitterShare to FacebookShare to Pinterest
Labels: Norwich