Sir William Parker was born on 1 December 1781 in Almington, Staffs, the son of Thomas Parker.  He was a nephew of Sir John Jervis, Earl St Vincent.

He entered the Royal Navy on 5 March 1793 as Captain's Servant to Capt John Thomas Duckworth, HMS Orion, on which he served in the West Indies and was present at the Battle of the Glorious First of June. He followed Duckworth into HMS Leviathan and was appointed Acting Lieutenant in June 1798, shortly afterwards joining HMS Queen, the flagship of Admiral Sir Hyde Parker.  While on the West Indies Station, he was given temporary command of the sloops Volage, Amaranthe and Pelican.  While in command of HMS Stone (in which he served in the West Indies, the North Sea and the Channel), he captured the French Packet La Legere with a valuable cargo, and, in company with HMS La Constance, the Spanish privateer El Cantara. He was made Post Captain on 9 October 1801.

He took command of HMS Amazon in November 1802, staying with her until February 1812.  He served in the Mediterranean Fleet under the command of Admiral Lord Nelson, who he soon impressed as a fine frigate captain.  At one point Nelson suspected that Sir John Orde, commanding ships around the Spanish coast, was intercepting his despatches and commandeering Nelson's frigates to use himself.  Nelson therefore ordered Parker not to stop for any of Orde's ships - Parker attempted this but was intercepted by HMS Eurydice.  He was however able to convince the Eurydice's commander to turn a blind eye and having delivered his despatches to Lisbon, acted on Nelson's hint that he was not expected back until February by carrying out a cruise that netted him several prizes worth a total of £20,000.  Orde complained about the 'poaching' taking place on his station, but the prize money went to Parker and Nelson.  Nelson remarked of him 'I admire his spirit and resolution to attack… under all the disadvantages of situation; such conduct will some happy day meet its reward.’

Parker and Amazon took part in the pursuit of Villeneuve, but missed out on Trafalgar.  After Nelson's death, Parker continued to distinguish himself.  Amazon was back in the Atlantic in 1806, this time as part of Sir John Borlase Warren’s pursuit of Jean-Baptiste Philibert Willaumez. When Warren's fleet unexpectedly encountered a separate French fleet under Charles-Alexandre Léon Durand Linois, Amazon became involved in the resulting Action of 13 March 1806.  During the battle she hunted down and captured the 40-gun frigate Belle Poule in a running engagement. The Amazon lost four killed and five wounded during the engagement, while the Belle Poule lost six killed and 24 wounded.

After leaving the Amazon, Parker was ashore until 1827, when he took command of HMS Warspite, serving as senior naval officer in the Aegean.  He was given command of the Royal Yacht, Prince Regent in 1829 and promoted rear-admiral in 1830.  In April 1831 was appointed second in command of the Channel Squadron, under Sir Edward Codrington. In September 1831 he was detached on an independent command at Lisbon, aboard Asia where he went to protect British interests during the Portuguese Civil War. When he returned to England he was appointed one of the Lords of the Admiralty.

He left the Admiralty in 1841, and was appointed commander-in-chief of the East Indies and China Station. Parker sailed for Hong Kong and assumed command of the squadron on 10 August 1841, raising his flag in the Cornwallis.  In this role, Parker commanded naval forces during the First Opium War, supervising operations from the capture of Amoy to the pacification of Nanking.  He was advanced to GCB and created a Baronet in recognition of his services.

In 1845 was Commander-in-Chief, Mediterranean Fleet. In May 1846, because of his knowledge of Portugal and its politics, he was given the additional command of the Channel Squadron while still remaining in charge of the Mediterranean. He was briefly (for a week) First Naval Lord in July 1846 but gave up the role due to ill health. He served as Commander-in-Chief, Plymouth from 1854 to 1857.

In 1863 he became an Admiral of the Fleet. He died on 13 November 1866 from complications from bronchitis, renowned as the last of Nelson's captains. He was buried in his parish churchyard near his home at Shenstone Lodge, and a monument to his memory was erected in Lichfield Cathedral. 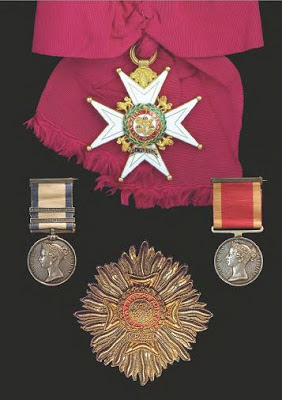 Parker's medals and other items relating to him were sold by Morton and Eden on 29 November 2012.  They were

In addition, Parker was a knight of the Order of St Ferdinand and of Merit (1815).