I had a bit of a jiffy bag dance this week.  I received some more miniatures.

First from the Perrys' range, which I've been impressed with for quite a while.

I chose to go on with my interest in the Sudan campaigns, by getting some basic firing lines (including some Sikhs) and an Gardner Gun crewed by men of the naval brigade. (The photos I've lifted from the Perrys website - I hope they don't mind on the grounds that it might generate some traffic for them!).

Secondly, I picked up a couple of second-hand pieces, originally from Black Cat, which seemed a bit of fun.   I got them because they're books - and that's enough for me!  But the figure on the right reminds me of a Lady Librarian of our acquaintance; and how can you go wrong with a book monster? 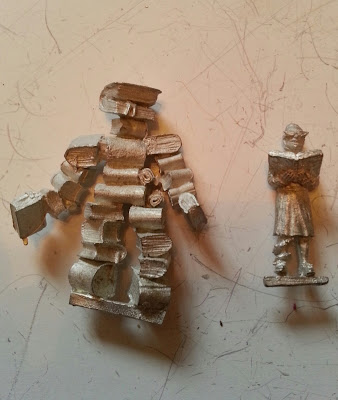