A Ceremonial Miscellany - The Thatcher Funeral

Just a few jottings on the Thatcher funeral that occur to me on watching the ceremony and looking at photos.

I'm not going to comment on the woman herself or the rights or wrongs of giving her a ceremonial/state funeral.  Please spare me from anything like that in the 'comments' section (I'll delete it anyway). 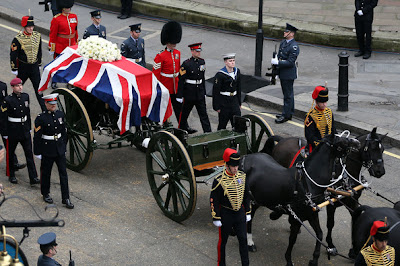 The use of gun carriages to carry the coffin is traditional in state and ceremonial funerals.

Since the funeral of Queen Victoria in February 1901, it has been usual in state funerals for the carriage to be drawn by members of the Royal Navy.  This is because when the coffin was loaded and the cortege moved off, the coupling broke on the carriage and the naval honour-guard jumped in to replace the horses in order to prevent delay.  The tradition has been followed for all state funerals (those of the subsequent kings, Winston Churchill and Lord Mountbattan) since.  That gun carriage, although belonging to the Royal Horse Artillery (RHA), is stored at the navy's gunnery school HMS Excellent at Portsmouth - photos and the full story here.

It looks to me that the gun-carriage used for Lady Thatcher's funeral wasn't the state gun-carriage.  It was drawn by horses from the RHA, which appeared to be quite spooked at one point. 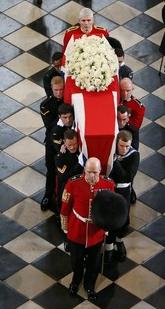 The pall bearers were selected from military units with connections with the Falklands War.  They were arranged by the unit's seniority (Royal Navy, Royal Marines, Royal Artillery, Scots Guards, Parachute Regt and a member of the Brigade of Gurhkas) and chosen so the shortest was at the front, the tallest at the back - this meant that one of the two tallest was a Gurhka: not an easy choice!

The bearers were supervised by GSM Bill Mott OBE, LVO and commanded by Major Nicky Mott MBE, both of the Welsh Guards.  The Motts are brothers and both survivors of the RFA Sir Galahad disaster during the Falklands.  There's a nice article on them here.


What was on the cushions? 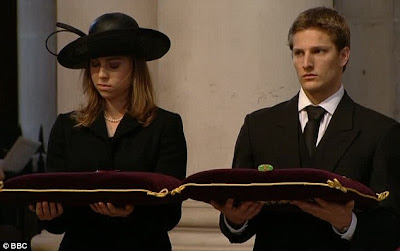 Unfortunately we didn't get a decent picture of them, but the cushions borne into the cathedral by Lady Thatcher's grandchildren and subsequently placed in her hearse had on them the insignia of the Order of the Garter and  the Order of Merit.

I will add links to both these orders once I've posted on them.  I've been promising a post on the OM for months!

Who was the man with the Big Hat? 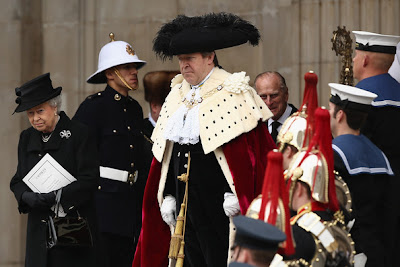 This was Roger Gifford, this year's Lord Mayor of the City of London.  This is a different position from the Mayor of London (Boris Johnston, the current mayor was also at the funeral, but didn't take any part in the ceremony).  Gifford is the 685th lord mayor, which is an indication of the antiquity of the post (established in 1189).  The lord mayor is elected from the among the aldermen of City of London (the 'Square Mile') every Michelmas (29 September) by the Liverymen of the City.  His function is ceremonial, charitable and to promote the interests of the City.

Technically the Crown and Parliament doesn't have any authority within the city precincts and the Queen only attends St Pauls by permission of and attended by the Lord Mayor. 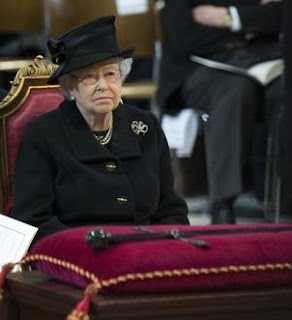 When she crosses the city boundaries on official duties, the Queen is met by the City Marshal and the Swordbearer (he's the one with the furry hat - a cap of maintenance, itself a rare privilege - peeking over the lord mayor's shoulder; his office is a newish one, first mentioned in 1419).  The City's sword is placed before her hilt first in a voluntary sign of submission, she then touches it before returning it to the Lord Mayor.

The sword used this morning is a special one, the Mourning Sword (one of five the City uses), it dates from the C16th and has been used as the Lord Mayors' mourning sword since the C19th.  It is distinguished by its black handle and accoutrements.  Like many things about this funeral, it was last seen at Sir Winston Churchill's funeral in 1965.

Which leads us to... 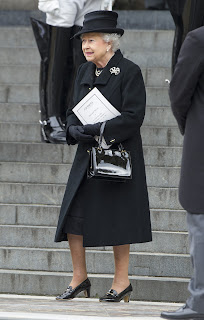 By custom the Queen only rarely attends funerals other than for members of the family (she'd never did anything else otherwise!), but sends a representative.  This was the first prime minister's funeral she's attended since Churchill's.

For those interested, 'From Her Majesty's Jewel Vault' has done it's usual bang-up job of identifying the jewelry the Queen wore at the funeral (one of Queen Victoria's pieces). 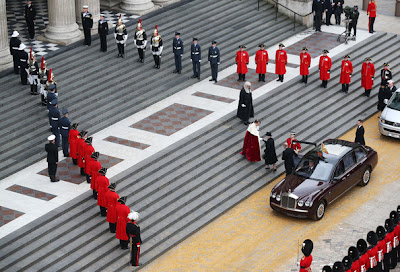 Part of the honour guard at St Paul's consisted of Chelsea Pensioners.  In retirement Lady Thatcher did a lot to support the Chelsea Hospital, visiting frequently and raising a lot of money for it.  The Hospital's 2009 infirmary wing is named after her. 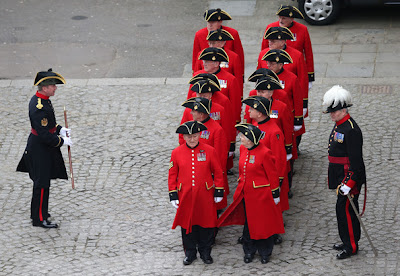