More on that Bearer Party 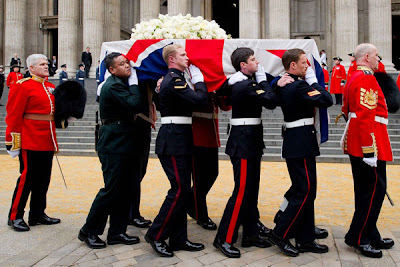 For those interested, a MoD press release gives full details of the members of the bearer party, down to their ages and home towns.  It also tells us about the cap orderlies which, for some inexplicable reason, I didn't do in my last post.

No so long ago I commented on the unusual sighting (at the Pope's inaugural mass) of British diplomatic uniform.  Well, today we had something even rarer - Privy Councillor's court uniform!  This is the Rt Hon Alan Duncan, the shy retiring MP for Rutland and Melton.