A New Knight of the Garter 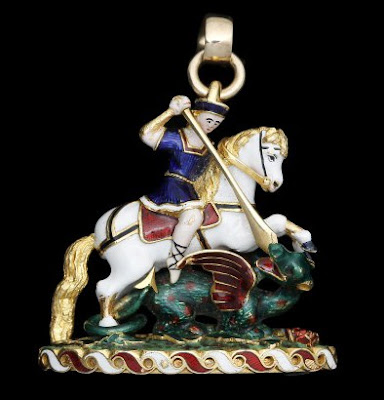 Today is St George's Day, the celebration of the patron of the Order of the Garter, and the day on which new companions of the order are traditionally named.

Admission to the order is a rare honour.  In addition to the Queen and Prince of Wales (who are ex officio members) there are only 24 Knight (or Lady) Companions.  Other, supernumerary members, may be made up of the members of the royal family and overseas members.  Appointments are in the personal gift of the Queen, who in this acts without the advice of her ministers go (this privilege was restored to the Crown in 1946 - I will go into the whys and whyfores when I blog on the history of the order).

There had been three vacancies in the membership (one them caused by Lady Thatcher's death last week), but today one of them was filled by the appointment of Lord Stirrup.  He will be instituted in June on Garter Day, the annual gathering of knights at Windsor Castle.  The new knight will take his oaths and be vested in his insignia in the throne room before the companions process in their velvet mantles and plumed hats to a service in St George's Chapel.

The membership of the order is currently as follows:-


Lord Stirrup was Chief of the Defence Staff, the professional head of Britain's armed forces, from 2006 to 2010.

He was born Graham Eric Stirrup on 4 Dec 1949 and is known as 'Jock'.  He was commissioned into the RAF in July 1970 and, on secondment to the Sultan of Oman's Air Force, flew as a fighter pilot during the Dhofar War.

In 1983 he was awarded the Air Force Cross for his coolness and skill in landing his aircraft with one engine on fire following a bird strike.  He was station commander of RAF Marham in Norfolk during the 1991 Gulf War.  He became Assistant Chief of the Air Staff in 1998.  In 2001 he commanded Operation Veritas, the UK Force's operations against the Taliban in Afghanistan.  He was promoted to Air Chief Marshal in Aug 2003 and appointed Chief of the Air Staff.  Three years later he was appointed Chief of the Defence Staff.  During his tenure, he supervised UK operations in Iraq and Afghanistan.   Following criticism of the Ministry of Defence for poor planning and problems in procurement and supply and the election of a new government, Stirrup was replaced earlier than planned.  He was granted a life peerage and entered the House of Lords as a cross-bencher.
at 18:19

Email ThisBlogThis!Share to TwitterShare to FacebookShare to Pinterest
Labels: Lord Stirrup, Order of the Garter, Orders of Chivalry, Royalty