During a short visit to Canada the Duke of Edinburgh has been awarded two new decorations by the Governor General.

The Order of Canada was established in 1967 to mark the centenary of Canadian Confederation.  There are three grades - Companion, Officer and Member. 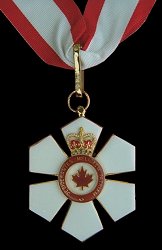 Prince Philip was offered appointment to the order as an Honorary Companion (ie, the grade given to non-Canadians) in 1982, but he refused on the grounds that, as the consort of the Queen, he was a Canadian and thus entitled to a substantive appointment (as is the case with his Australian honours).  In 1993,  an amendment to the constitution of the Order was proposed, making the sovereign's spouse automatically a Companion, but Prince Philip again refused, stating that if he was to be appointed, it should be on his merits.  The grade of Extraordinary Companion is a new one, apparently created along the lines of the 1993 proposal.

The Companion's insignia is a neck-badge in the form of a stylized snowflake of six points, with a red annulus at its centre which bears a stylized maple leaf circumscribed with the motto of the Order, DESIDERANTES MELIOREM PATRIAM (They desire a better country), surmounted by St Edward’s Crown.

The Order of Military Merit is, as its name suggests, a military honour. It is open to all members of the Canadian Forces, whether regular or reserves, who have displaced extraordinary devotion or merit.  It was established in 1972 and has three grades - Commander, Officer and Member.

The Commanders' insignia is a neck-badge, a blue-enamelled, straight-end cross (four arms, narrow at the centre, wider at the ends) with an annulus in red surmounted by St Edward’s Crown. The annulus bears the inscription MERIT.MÉRITE.CANADA. 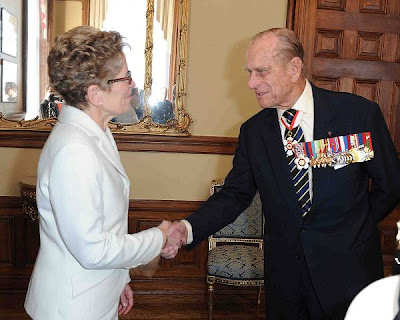