A Nice Day Out


Yesterday, I did that most dangerous of things - meeting up with an on-line acquaintance!  Like many people, I've done this before and ended up having a dreadful time, running out of things to say after the first five minutes and finding out that we have very little in common.  Fortunately, that didn't happen this time.  It didn't hurt that we had a very meal in a country restaurant...

The guy in question is a fellow medal collector, who I've corresponded with for a couple of years but never met, despite only living about 15 miles away.  We'd spoken about it, we've dug diaries out and pencilled dates in, but we've never actually got around to it.  This week we finally got there.

We made the obligatory "isn't the market getting expensive!" comments, though Bill (not his real name) are one different ends of the funding-spectrum of our hobby.  Medal collectors will know what I'm talking about when I say that his solution is to move to the cheaper field of buying nurses medals...

Despite that, we had a really good chat about things, helped by the fact that we have many interests in common in addition to medals.  It was one of the most pleasant days I've had for a long time.

You know your in for a treat when your in the box-room of someone's house going through odd frames and you hear "and this is another GBE group..."

And even something for us naval types... 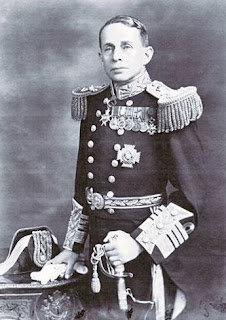 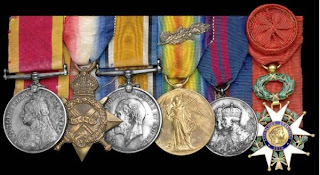 I got to handle the badge of a Companion of the Order of Indian Empire for the first time.  I was surprised to find how light it was - they are hollow.  Being made of 24ct gold and enamels, it's not surprising that they're so often damaged.  Despite that, I'm confirmed in my belief that the higher grades of the Order of the British Empire are more attractive.  We both agreed however, that nothing could touch the Order of the Star of India, designed by Prince Albert (who the tiara lovers among us know had a very good eye).  Even Bill doesn't have a KSCI!