Back Into the Archive World

I've been off-line for a couple of days as I've been down to the National Archives in Kew. It's over 15 years since I've visited TNA (then the Public Record Office), and probably 30 since I used it as a customer.  But the trip went well. The main reason for going down was to help my sister trace some of her husband's ancestors, but I took the opportunity to call up some military records.

The main problem was the journey.   We ended up changing at Colchester and then getting a train that seemed to stop everywhere in Essex before getting to Stratford.  Then there were the trials of traveling across London from Stratford (the site of the 2012 Olympics) to Kew.  On the way back, in order to get a reasonably-priced ticket, we had to wait until 19:26 before we could catch a train back.  All very tiresome...

There was the initial hassle of registration (despite me reading from the list on their website, my sister hadn't brought the required forms of id), but we were soon off  Not having a reading ticket, Liz wasn't able to come into the reading room and consult original documents, but there was plenty for her to do with the surrogates and I took photos of the rest.

I managed to consult the war diary for my grandfather's unit in the Third Afghanistan War... 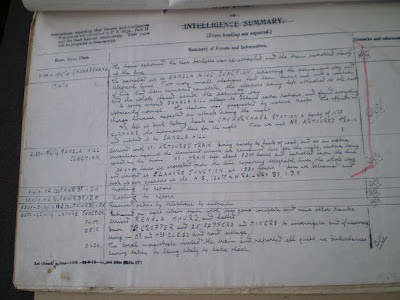 ...and some odds and ends for fellow medal collectors... 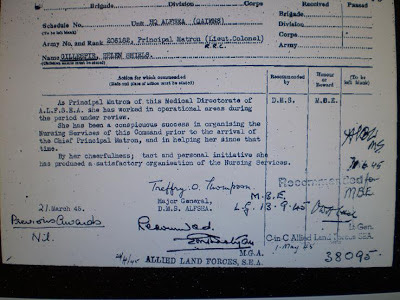 As well as the the records of an ancestor who took part in the 1811 invasion of Java and all sorts of naval relatives (which included the discovery that one took part in the Sydney-Emden engagement).

All in all a fruitful day and I'll be back.