Prince Phillip and the Order of New Zealand

In case anyone needed to know why I haven't done a Royals in Medals post for the Duke of Edinburgh, here's an answer - his already complex rack just keeps on growing!

Only five weeks on from receiving Canadian honours, Prince Phillip was today invested with the insignia of the Order of New Zealand by the Queen, as sovereign of the order.  To be fair though, this award (as an additional member) was one of four made in the Jubilee Honours List last year.

Sadly, the official photos didn't include one of the insignia.  Let me meet that need... 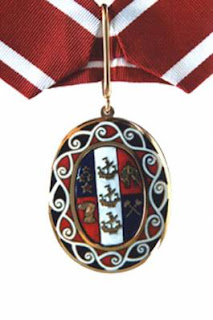 The insignia (manufactured by Spink & Son) is the same for all grades of membership: an oval medallion in gold and coloured enamels, bearing in the centre the design of the shield of the New Zealand Coat of Arms within a Kowhaiwhai rafter pattern. It was were designed by Phillip O’Shea, New Zealand Herald of Arms Extraordinary to The Queen, who has done several nice pieces of work for the New Zealand honours system.

A man's badge is worn from a neck ribbon.  A woman's badge is worn on a ribbon bow on her left shoulder.  The ribbon is red ochre (kôkôwai) with a narrow white stripe towards either edge.  Kôkôwai has also been used in the ribbons of  NZ Order of Merit and The Queen’s Service Order and Medal. This colour has a spiritual significance for Maori. The badge must be returned to the Crown on the death of the holder or on the holder ceasing to be a member of the Order; it is then passed to another appointee to the order.

Ordinary membership of the order is limited to 20 members.  Additional members can be appointed on special occasions (this happened in 1990 for the 150th anniversary of the Treaty of Waitangi, in 2002 for the Golden Jubilee, in 2007 for the 20th anniversary of the institution of the order and last year for the Diamond Jubilee). Honorary membership includes citizens of nations of which the Queen is not Head of State.


After this investiture and a garden party, the Duke has been admitted to hospital for 'an exploratory operation following abdominal investigations'. He is expected to stay in hospital for up to two weeks.  Naturally, at his age, any admission to hospital (let alone an operation) is a cause for concern.
at 22:22