Renn Dickson Hampden was born in Barbados on 29 March 1789.  He was sent to school in England in 1798, entering Oriel College, Oxford in May 1810, where he was a friend of Thomas Arnold and Richard Whately.  He graduated BA in 1814 and MA in 1816.  He was elected a Fellow of Oriel in 1814 - among his colleagues were Keble, Newman and Pusey, later the leaders of the Oxford Movement.

On 24 April 1816 he married Mary Lovell of Bath and, as was required at the time, resigned his fellowship.  He was ordained on 22 December 1816 and became curate of Newton, near Bath.  He was then  successively curate of Blagdon, of Faringdon, of Hungerford, and of Hackney.  He remained a scholar and in 1827 published Essays on the Philosophical Evidence of Christianity.

He was elected Bampton lecturer at Oxford in 1832, and appointed a tutor at Oriel.  In April 1833 he was nominated principal of St Mary Hall, Oxford, by the prime minister and was made Professor of Moral Philosophy at the University in 1834.   In the same year, Hampden's Bampton Lectures were published as The Scholastic Philosophy considered in its relation to Christian Theology.  These proved controversial.

When in 1836 he was offered the Regius Professorship of Theology (which is attached to a canonry of Christ Church Cathedral, Oxford), Hampden was attacked by high churchmen on the grounds that the lectures were unorthodox.  In particular they objected to the statement that the authority of the scriptures and of reason was of greater weight than the authority of the church.  John Henry Newman published  Elucidations of Dr Hampden's Theological Statements and the case became the first measure of the Tractarians' influence at Oxford.  The heads of Oxford houses were persuaded to condemn the lectures.   Hampden offered to withdraw from the appointment, but the prime minister Lord Melbourne insisted he take it, and he did so in October 1836. However, in March 1837, a motion was proposed convocation for the exclusion of the regius professor from his place on the board that chose select preachers for the university.  The exclusion was carried, but the proctors exercised their right of veto. The proposal was again brought forward in May, and a change of proctors having in the meantime taken place, it was carried.

Hampden's appointment was subject of bitter controversy, and, in true ecclesiastical and university fashion, many books and pamphlets were issued by the parties to the discussion.

In 1847 Lord John Russell, the Prime Minister, offered Hampden the see of Hereford.  Russell was fanatically opposed to the 'Romanizing tendencies' of the Oxford Movement, and Hampden's best qualification in his eyes was probably that they had opposed him so violently.

Yet it was not only the extreme High Church party which objected to Hampden.  Thirteen diocesan bishops presented an address of remonstrance to Russell and John Merewether, the Dean of Hereford, wrote to him that he would vote against Hampden's election when the Queen's congé d'elire was presented.  Russell famously replied:  'Sir, I have had the honour to receive your letter of the 23rd instant, in which you intimate to me your intention of violating the law.'  Hampden was elected bishop on 28 December, the dean and a canon voting against him; Merewether refused to affix the chapter seal.

The Dictionary of National Biography continues:


At the confirmation in Bow Church on 11 Jan. 1848, when the custom of citing opposers was followed, three persons appeared by their proctors as opposers, but Dr. Lushington [the Dean of Arches - a judge of the Province of Canterbury] gave judgment that the opposers had no right to appear. These persons then made an application to the court of queen's bench for a mandamus to force the Archbishop of Canterbury to listen to them. A rule having been obtained, on 24 Jan. the attorney-general began the argument, and on 1 Feb. judgment was given against the issuing of the mandamus.

This question of the bishopric again gave rise to a paper war, and upwards of thirty works on the matter issued from the press. 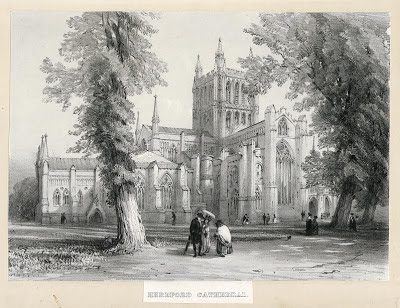 Hampden was finally consecrated as bishop in Lambeth Palace Chapel on 26 March 1848.  After all the fuss, his episcopate was undistinguished.  The Encyclopædia Britannica summed it up as follows:  'As bishop of Hereford Dr Hampden made no change in his long-formed habits of studious seclusion, and though he showed no special ecclesiastical activity or zeal, the diocese certainly prospered in his charge'.