From the Painting Table...

This week hasn't been a good one for painting.

On Sunday it was sunny enough for me to put the washing out and go to the Shed of Delights to prime some figures.  Then, after walking the dog I was a little tired and went upstairs for a nap.  When I woke up it was dark and raining on both the washing and figures.  Since then I've been suffering from a horrible cold.  I tried to put brush to lead on Tuesday, but made a horrible mess.

Today I seem to have got over the worse of it, and I feel much better.

Ladies and Gentlemen, I can therefore present Lubbock and Agrippa. 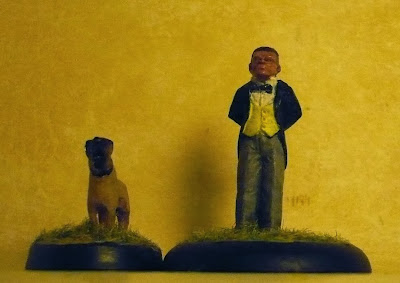 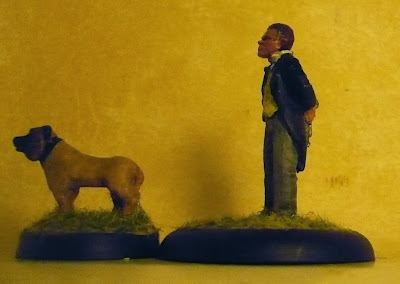 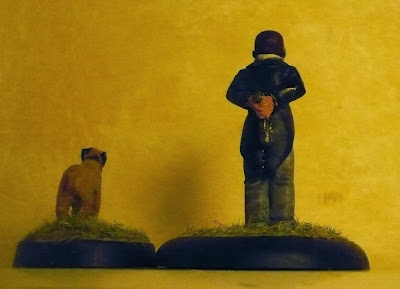 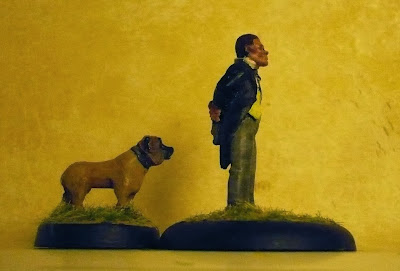 If I carry on posting like this, my photography will improve along with my painting!

I suspect that I'm not alone in enjoying painting a figure more when I have an idea of its character.

To my mind, Lubbock hasn't always been a Gentleman's Gentleman.  No doubt he was someone's batman, but I'm almost sure that he was at some stage a Jelly Man.  To be honest, he probably owes something to Magersfontein Lugg in Margery Allingham's Campion stories, though sadly not as played by the late lamented Brian Glover (giving miniatures such a haircut is beyond my rudimentary conversion skills!).  Oddly enough, another of the figures I primed looks a lot like that other great Yorkshireman, Pete Postlethwaite: when I paint him up I'll be able to tell you my Postlethwaite anecdote.

Agrippa on the other hand is like a big teddy bear - he'll rip your face off and steal your marmalade sandwiches.
at 17:47

Email ThisBlogThis!Share to TwitterShare to FacebookShare to Pinterest
Labels: WIP