William Ullathorne was born at Pocklington, Yorkshire, on 7 May 1806, the son of William and Hannah Ullathorne.   His father claimed descent from St Thomas More, and his mother (née Longstaff) was a cousin of the explorer Sir John Franklin.

He joined his father's merchant's business at the age of 12, but wanted to go to sea and, at the age of 15, signed on as an apprentice.  He made several voyages in the Baltic and Mediterranean, but had a religious experience while attending Mass at Memel.  He joined the Benedictines at Downside, near Bath, in 1823, and made his profession as a monk on 5 Apr 1825, taking the name Bernard in religion.

Ullathorne was ordained priest on 24 Sep 1831 and volunteered to serve the Australian Mission.  He was immediately appointed vicar-general, the bishop having jurisdiction over Australia being resident in Mauritius.  He successfully petitioned the Pope to establish, in 1834, a local hierarchy.  The first Bishop of Sydney was John Bede Polding, Ullathorne's old director of studies at Downside.  Ullathorne had much experience of the Catholic underclass in the colony - preparing for execution those sentenced to death following an armed uprising in 1834, and traveling to the notorious penal settlement on Norfolk Island.  He returned to Europe, acting as Polding's agent in London and Rome, and was a vocal witness before the Parliamentary Commission on Transportation in 1837.  In the same year he published The Horrors of Transportation Briefly Unfolded to the People.  He permanently left Australia in 1840.  He had declined a bishopric five times during his service in Australia.

He took up a parish in Coventry where, in 1846, he was appointed titular bishop of Hetalonia and Vicar Apostolic of the Western District, taking up residence in Bristol.  On the restoration of the English hierarchy in Sep 1850 he was appointed first Bishop of Birmingham (with jurisdiction over Staffordshire, Oxfordshire, Warwickshire and Worcestershire).  John Henry Newman preached at his enthronement.  The financial situation of the new diocese was so bad that Ullathorne was once committed to gaol for debt.  Nethertheless, during his 38 year tenure 67 new churches, 32 convents and nearly 200 mission schools were built.


Ullathorne was the first choice for the vacant Archdiocese of Westminster in 1865, but eventually Henry Edward Manning was appointed.  He attended the First Vatican Council, 1869-1870, where he joined the majority of English bishops in supporting papal infallibility, though with reservations (which caused some friction with Manning).

In 1888 he retired and received the personal title of Archbishop of Cabasa.  He died on the feast of St Benedict, 21 Mar 1889, and his monument is in the crypt of his cathedral in Birmingham, St Chad's.  He is buried at St Dominic's Convent, Stone, Staffordshire. 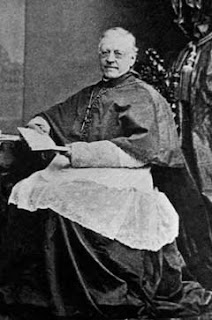 Ullathorne remained a forthright Yorkshireman throughout his life.  Asked (as one is) on his deathbed to renounce the devil, he responded: