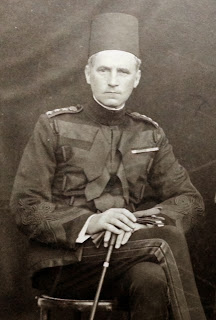 Robert Spiers was an Asyriologist working for the Palestine Exploration Fund when the First World War broke out.  Joining up, he found himself serving on Gen Allenby's staff and on detachment to his old Oxford friend Col Lawrence with the Arabs.  This reignited his thirst for adventure, and dissatisfaction with academic life.

After attending the Paris Peace Conference, he was surprised, but pleased, to received a job offer from Allenby (by now a Field Marshall, Viscount and High Commissioner in the new Kingdom of Egypt).  He became head of the Criminal Investigation Department of the Cairo Police, with instructions to modernise the force as effectively as possible.  His successful introduction of forensic scientific methods had quick results, within a year doubling the conviction rates in cases of domestic poisoning.  This earned him the Order of the Nile (4th Class) and the special remit of ferreting out the foreign adventurers who were infesting the criminal underworld.

Cairo quickly learned that the Bimbashi always gets his man...

Despite his successes, Spiers soon realised that this underworld was more organised than had been accepted to this point.  Indeed, he began to suspect that behind the mass smuggling of antiquities feeding Western Eyptomania lay a plot to restore Ottoman rule.  He is to find that the truth is much more sinister and there is a much darker, more ancient evil involved...


Known as "Spiers's Specials" the SID, hand-picked  from the best of the gendarme form an elite with a constant queue of applicants (given the dangers they face daily, this is a good thing!).   Seniority or adherence to protocol are not selection criteria: intelligence, initiative and the ability to get things done weigh much more.

They are led by the Ghaffir a NCO of uncertain background, whose years of undercover work has left him with a disdain for hierarchy and even uniform.  He is fiercely loyal to the Bimbashi, whose methods puzzle him but leave him in awe.  The pair have saved each other's lives on several occasions.

With a direct line to the Minister of the Interior and given his personal relationship with the High Commissioner, Spiers knows he can call on support at short notice from other elements of the police and the British army stationed in Egypt.


In tackling the illicit antiquities, the SIU often works with, and occasionally reports to Dr El-Seyed, the Director of Antiquities at the Ministry of the Interior.

Although from an ancient family of hereditary tomb-robbers, El-Seyed appears to have chosen to be a gamekeeper rather than a poacher.  Back in the 1880s he had been a water-boy during the uncovering of the Sphinx; he soon rose up through the ranks of 'native helpers' to become the youngest Reis, or foreman, in the field.

In an early example of local talent-spotting, he was awarded a scholarship by the Egyptian Exploration Society to attend the University of Manchester.  He subsequently studied at the Collège de France and worked for the Institut Français d’Archéologie Orientale.

His appointment as Director of Antiquities, part of the 'Egyptianisation' of the civil service, was a controversial one - European critics suggested that the old Ottoman system of 'promotion by stomach' had returned.  Little do they know that, in addition to his decades of experience of excavation and administration, a big factor in his rise is his membership of a certain Secret Brotherhood...

Ass you can probably see, the Bimbashi and constables will be from the Perry's' Egyptian Army range.  I haven't yet decided about the ghaffir.

Email ThisBlogThis!Share to TwitterShare to FacebookShare to Pinterest
Labels: Pulp in Egypt