The Aurora in St Petersberg

The other week I reviewed The Tsar's Last Armada an account of the trek of the Russian Second Pacific Squadron from the Baltic to its demise in the Korean Straits. 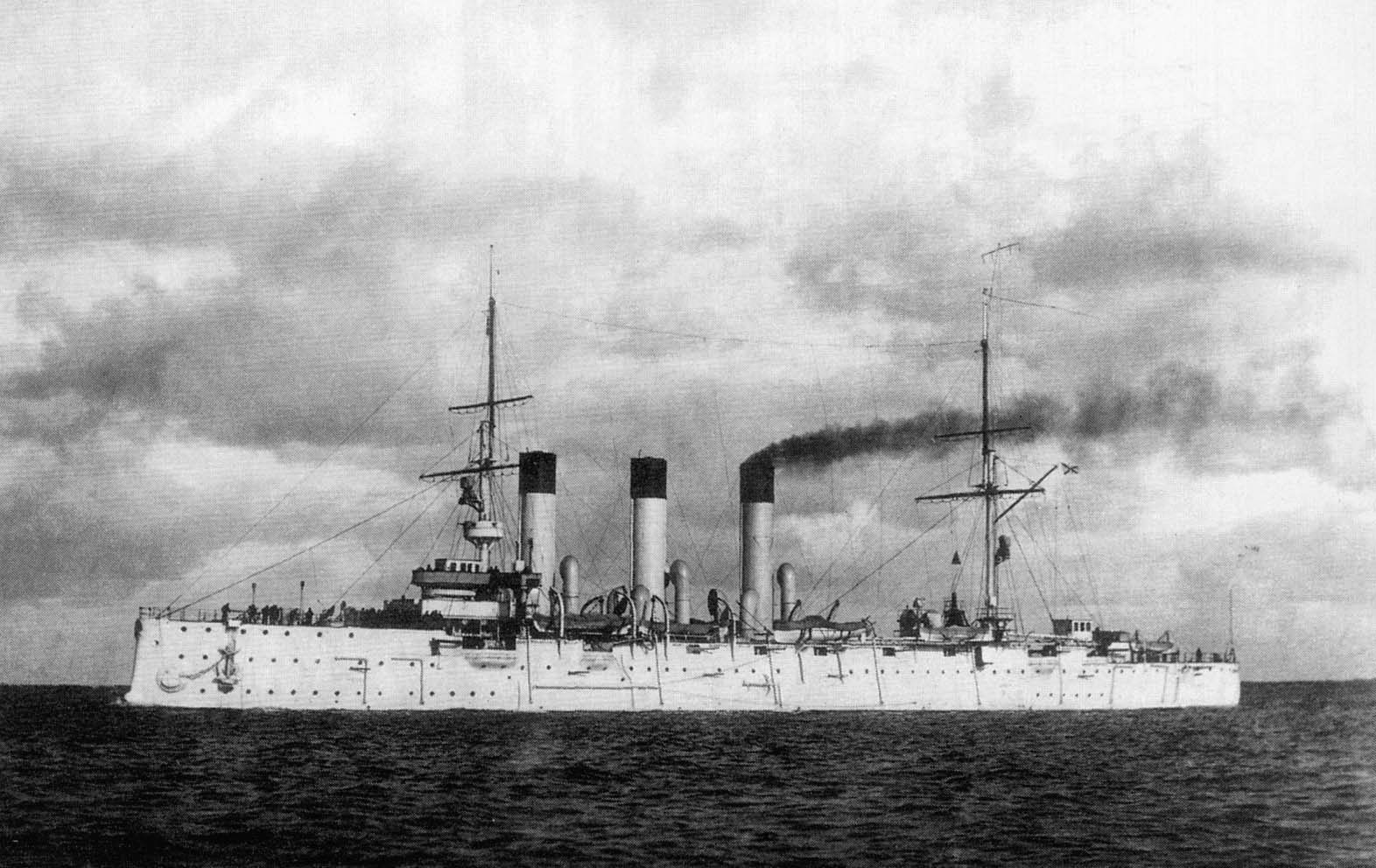 One survivor of the Battle of Tsushima was the Palladia-Class cruiser Aurora, who has had a remarkable subsequent career.  She was one of the newest components of that fleet, having been built in St Petersburg in 1903.  Despite an unlucky start to the campaign - her chaplain was killed by friendly fire during the mistaken attack on the Hull fishing fleet - she survived Tsushima. 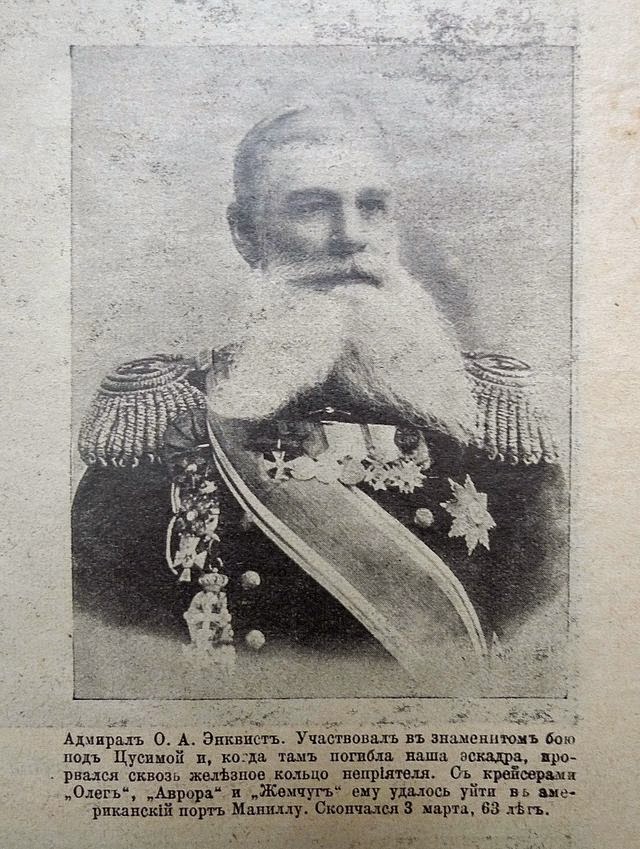 On the day of the battle, she was flying the flag of Vice-Adm Oskar Enkvist.  After the disastrous first day he controversially decided not to engage the enemy or make for the naval base at Vladivostok, but instead to head for the relative safety of American-held Manila, where the Aurora and the other ships with her were interned until the end of the war.  On his repatriation to Russia Enkvist was dismissed.

Once she returned to St Petersburg, Aurora was attached to the naval academy and provided cadets with sea time.  She served in the Baltic during the First World War.  She had earned a footnote in naval history.  What came next, earned her a place at the heart of the Russian soul. 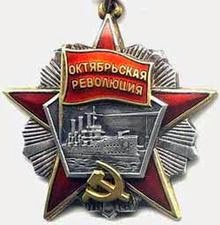 By 1917, St Petersburg had become Petrograd and was the centre of the February Revolution which led to the abdication of the Tsar.  Aurora's crew formed a revolutionary committee and elected their own officers.  At 9:45pm on 7 Nov 1917 (25 Oct in the Russian calendar) a blank shot was fired from one of Aurora's guns to signal the assault on the Winter Palace led by Vladimir Lenin.  The October Revolution and the ascendancy of the Bolsheviks had begun.   When the Order of the October Revolution was established on the 50th anniversary in 1967, Aurora featured on the badge.


When the the Germans invaded the Soviet Union in 1941, Aurora was again in her home port (no Leningrad).  Her guns were deshipped and used in the defences of the city, she herself was badly damaged and sunk by the Luftwaffe.  After the war, Aurora was repaired and preserved as a memorial to the October Revolution (and less officially to the defenders of Leningrad).

All this serves as a preamble to the next bit...

In January 2013, the Russian Defence Minister announced that Aurora was to be recommissioned and would serve as flagship of the Russian Navy.  She left her berth in St Petersburg at the end of September (I included a picture of this in my previous post).  She's now in dry-dock undergoing a major refit.  The whole point of this post is to point to a webpage with a series of splendid pictures here. 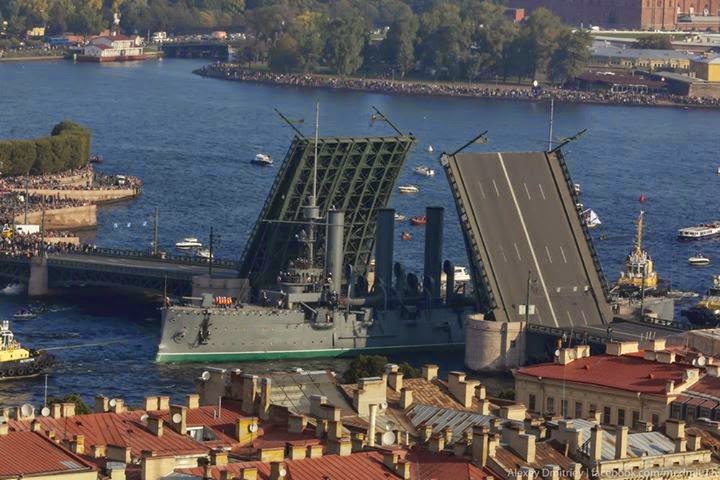 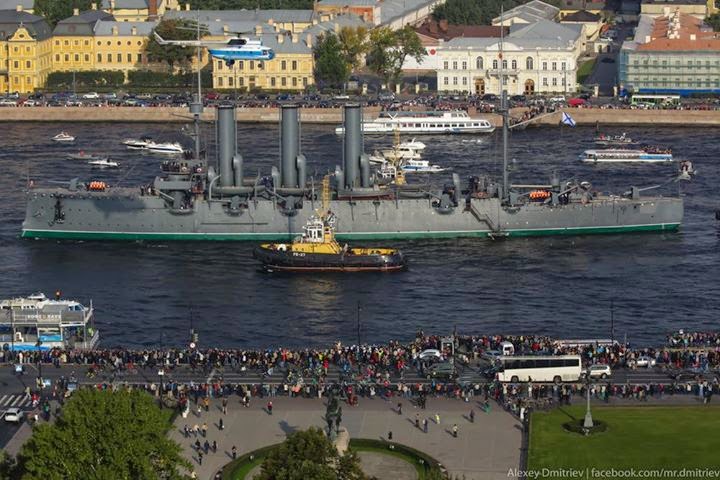 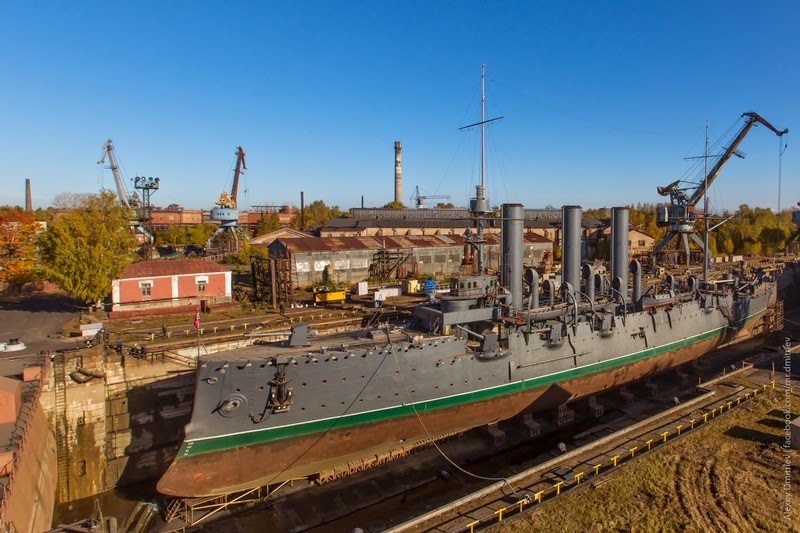