On the Colour of Daleks

As I mentioned the other day, I've recently put a couple of orders in with Black Tree Design, who have a licence for Classic Dr Who.  As some of you will know, BTD have what might best be described as an 'interesting' pricing policy.  If you register with them (it's free) you get a discount and a weekly e-mail advising you on which ranges extra discounts are in force.  In addition every so often there are bonus coupons.  All in all it must make working out profit margins quite tricky. 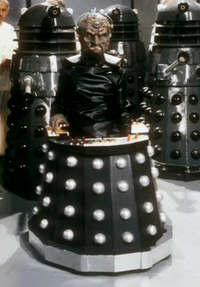 There is no sign of the Daleks I ordered on 13 Oct, but as the order that arrived today (which I placed on 28 Oct) included Davros, I feel I can raise my self-imposed moratorium on this post.

Now, I knew that the colour of Daleks indicates a heirarchy, and although I'm not a rivet-counter, I wanted to get it right.  Do you think that there might be information on t'Internet about Dalek colour schemes?  Boy, is there!*

An evening's pottering about told me the BTD's Dalek is suitable for models between 'Evil of the Daleks' and 'Remembrance of the Daleks' (ie, 1967-1988).  Also, the hierarchy isn't as marked as I remember it (the more colourful ones - including "legendary 'red-top'" - are from the Peter Cushing movies).

So, if and when I get around to painting them, I shall go for one of the following schemes for the drones**:-


Although the 1960s Daleks have a cooler scheme, 'Death' and 'Genesis'  were my introduction to the Daleks back in thee day, so I'll probably go for them***.

However, rather than just going for a 'Black Top' as a leader, I couldn't resist this guy...

As is no doubt obvious, this is the Dalek Supreme from 'Planet of the Daleks' (1973).

One last thing, there's even a site where you can custom your own Dalek...

*     And if you want rivet-counting...
**   Pictures by The Mind Robber - a great site for those into Dr Who.
***Fortunately for the Supreme Dalek Race BTD's Doctors are fairly crap so unless I get the Not-Jon Pertwee from Crooked Dice, their plans will go unthwarted.
at 19:48

Email ThisBlogThis!Share to TwitterShare to FacebookShare to Pinterest
Labels: Daleks, Dr Who, Shiney