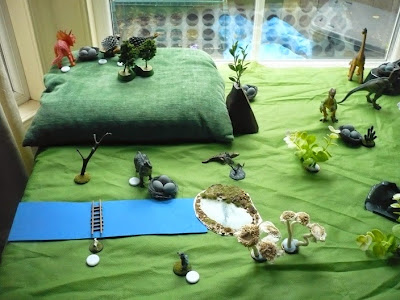 The Wife suggested a mechanism which reduced the area of play each turn, creating more conflict between explorers and dinos (a lava flow - "All good dinosaur movies [sic] have a volcano!"), I like this idea, which would also mean limited turns, but I'm going to play on and see how the dynamic changes as the explorers move further into the dinos' territory and eggs come into play.

I'm satisfied with the addition of an extra dino each turn and the random movement until explorers come into range.  In this game, the dice gods have decreed that three dinos mill around on the hill in the corner doing nothing, which may he why the explorers have been having it easy.

Making the explorers cross a river, swamp or crevasse at the start may make life more difficult for them.

I'm going to carry on with the current set-up and see what happens if eggs come into play.

Coming soon!  The next thrilling installment of...