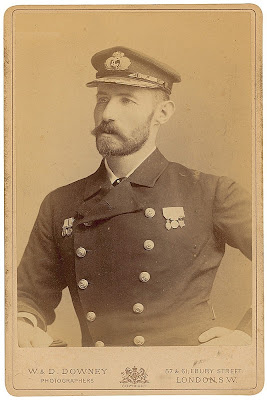 Robert Archibald James Montgomerie was born at Rothesay, Isle of Bute, on 11 September 1855.

In 1872 he was appointed Sub-Lieutenant in the screw-frigate HMS Immortalité , part of a detached squadron under Admiral Lambert.  The London Gazette of 19 June 1877, takes up the story:

At 3.10 on the morning of the 6th April, 1877, the Immortalité, being under all plain sail, moving 4½ knots with the wind, two points abaft the starboard beam, the port gangway look-out reported a man overboard, who proved to be Thomas Hocken. Mr Montgomerie, who was on the bridge, working a star meridian altitude at the chart table, on hearing the cry, ran over to the lee side, saw the man in the water, and jumped after him. He made for Hocken, asking if he could swim, to which Hocken answered "Yes, sir," but did not seem to be moving vigorously. Mr Montgomerie then got hold of him, hauled him on his back, and towed him to where he supposed the life-buoy would be, but seeing no relief, he told Hocken to keep himself a float while he took his clothes off. While he was in the act of doing so, Hocken, evidently sinking, caught hold of him by the legs, and dragged him down a considerable depth. Mr Mongomerie, however, succeeded in getting clear, and swam to the surface, bringing the drowning man with him. Hocken was now insensible, and too great a weight to support any longer, and finding that his only chance of saving himself was to leave Hocken, Mr Montgomerie reluctantly gave up the hope of saving him, and struck out for the ship. In the meantime the ship's course was stopped, and two boats were lowered, by one of which Mr Montgomerie was picked up. The latitudes in which the occurrence took place abound with sharks; and though there was a half-moon, the sea was sufficiently disturbed to render small objects, even boats, difficult to discern. Had not Mr. Montgomerie been a most powerful swimmer, he would have had little chance of life.


For this action, Montgomerie was awarded the Albert Medal (Sea), Second Class, the Silver Medal of the Royal Humane Society and, later, the RHS's Stanhope Medal for the most gallant rescue during the year.

In 1878 he was promoted to the rank of Lieutenant on the Royal Yacht Victoria and Albert; Commander in 1887 and Captain in 1894.  He was given command of the cruiser HMS Bonaventure in 1898, the battleship Prince George in October, 1900 and the cruiser Charybdis in 1901.

He was promoted Rear-Admiral in 1905, commanding Torpedo Boat and Submarine Craft Flotillas. In 1907 he became Rear-Admiral (D) in the Channel Fleet. He resigned in January 1908 following a dispute with the Admiralty over fuel allowances for training.

In 1886 he married Aletha Marian Charrington, daughter of Spencer Charrington MP.  They had one son, Maj Victor Robert Montgomerie Charrington OBE of the Life Guards.  Admiral Montgomerie died on 1 September 1908.