BRF: Generations, Niggles and "What If..."

It's been quite a while since there were three generation of direct heirs to the British throne.  The last time was the birth of Prince Edward of Wales (later Edward VIII and then Duke of Windsor) in June 1894.  Then the running order was


Edward's childhood coincided with the Golden Age of Postcards, so I thought it would be nice to show some examples from my collection.  Particularly popular were 'Generations' portraits.  They range from the compilations to actual portraits.  Some, you will see are pretty ropey!

[When I wrote the above, I thought I had a card of Edward sitting on Victoria's lap, but I must be imagining it.] 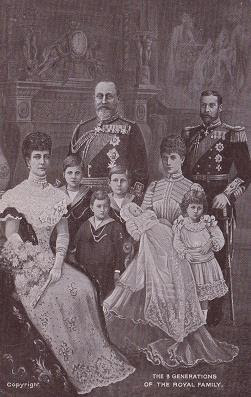 After this, they shot the artist who'd drawn Edward VII and came out with... 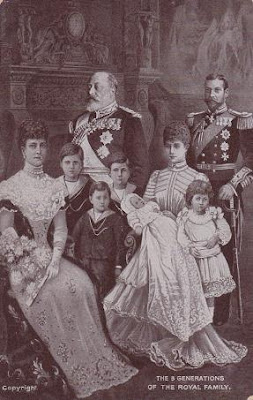 And then there's early photoshop.... 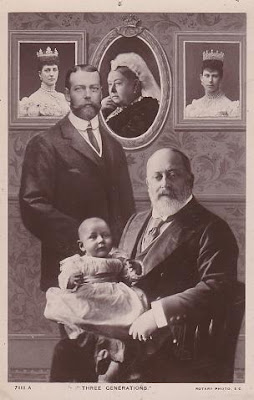 And let's throw in a gratuitous naval shot... 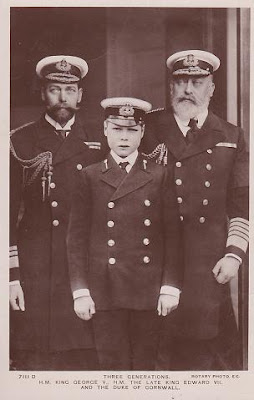 These references to  'the baby who will be the future king' were getting jar with me slightly.  Let's not forget that to become king, Prince Bert and/or Ernie has to outlive the current Queen, the Prince of Wales and Prince William.  Although we do of course hope that happens, it's not a certainty - there is a reason that they're called 'heirs presumptive' after all.  Princelings might be less likely to die of typhoid these days, but stuff happens in life.

We've had bad luck with heirs in the last couple of hundred years - the death of Frederick, Prince of Wales, left the Hanovers all over the place and the circumstances that led to Victoria ascending the throne meant it was touch and go for the monarchy for a while (and lost us a chunk of Germany).  There is a history of younger sons being thrust into the limelight - the death of the much-maligned Prince Albert Victor led to the then Duke of York acquiring his fiancee and the mantle of King-Emperor (would we have had a First World War if it'd been King Albert and Queen Mary rather than George V?  Who knows).  Another Prince Albert and Duke of York became another King George on Edward VIII's abdication - another huge 'What if...' question.

Not one of mine, and slightly pre-postcard, but this gives you the idea 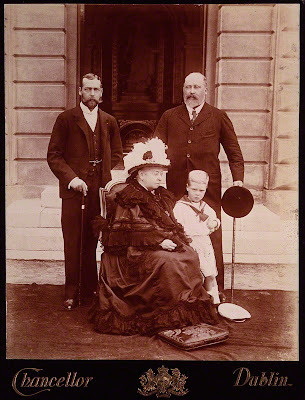