The other week I posted about the new £2.00 coin the Royal Mint is issuing to commemorate the start of World War I. 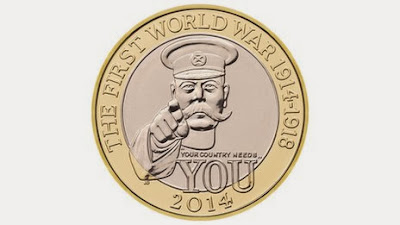 It features Kitchener in his 'Your Country Needs You!' pose.  Rather predictably, and a sadly, there has been a backlash to this.  In my normally excellent newspaper last week someone wrote that he was unworthy because he recruited and sent a lot of men to their deaths.  Showing an unusual knowledge of history for such writers, he also pointed out that Kitchener was also pretty mean to the inhabitants of the Sudan and "invented concentration camps" (perhaps he'd seen 'Dad's Army' and 'Breaker Morant').

I'm not really here to defend Kitchener.  Those three factoids are true as far as they go, and importantly they show the level that the 'debate' about the Commemoration of World War I is at.  I find this whole Michael Gove vs Blackadder debate rather depressing.  Perhaps by the time we get to August 2014 (or November 2018), things will be a little less black-and-white.

Going back to the coins, there is now an on-line petition to get Edith Cavell on a coin.  I support this suggestion, but I haven't signed the petition, partly as it's being touted as a balance to the Kitchener coin (using the ignorant and false distinction that he was 'For' war and she was 'Against' it) as because it was almost certainly already planned for 2015 (the centenary of her death).   After the hassle the Bank of England had over not pre-announcing their plans to have Jane Austin on a banknote (and thus inviting 'Bank Ignores Women' headlines) it's a surprise that the Mint has merely responded that they have plans to feature other individuals, but will neither confirm nor deny that Cavell is among them. 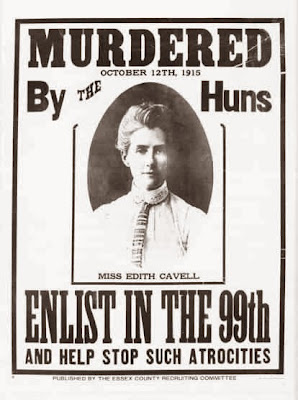 On the assumption they mean it when they say 'individuals', who else will they feature?  I can't think who would be appropriate.  Let's assume there's one a year:

My guess for 2018 is based on the fact that Owen will be a crowd-pleaser - everyone remember him from school and he also appeals to the 'War is Bad' sector.  Equally, we all know Lawrence of Arabia (and he covers 'The Treaty of Versailles Was Bad').

2016 might mark the Battles of the Somme or Jutland.  I can't imagine Haig or Rawlinson would be politically acceptable.  But what about Jellicoe or Beatty?  It would be amusing to see the 1920s Jutland controversies rehashed.

Who else features in the popular mind when considering WWI?


Tubby Clayton, Woodbine Willie or  Walter Tull might be interesting.  Sir Fabian Ware would get my vote.
at 21:22