Week three of the painting challenge is about to start, and I feel it's going well.  I'm pleased with my own progress and am impressed by the marvelous work submitted by other Wild Bunchers (that sounds as if it has something to do with ill-fitting underwear...).

Painting this week has been going fitfully - most days I get an hour or so in.  Not a lot compared to some of you, but it means I'm making an effort to sit down each evening and paint.  I managed to submit my entry for the villains bonus round on Friday, and hope I've raised my game from the civilian round.

I started the Zulu War infantry I mentioned the other day.  I don't normally do before and after photos, but these figures were such a lurid colour that I took a photo straight out of the box. 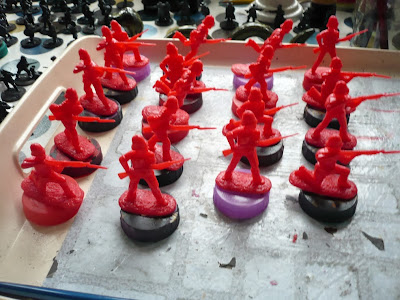 Mind you, it was quite handy for spotting the bit's I'd missed when spray-priming.   They're now looking a little different.

I've realised that I might have missed a trick when I submitted my Santa figure.  I should have used it as my Peckinpah-themed figure - 'Bring Me the Head of Alfredo Garcia'.

I've taken advantage of the post-Christmas sales at Wayland Games and Northstar to by some odds and ends.  The figures (a Celtic dog-handler with hounds, some dungeon monsters and a trio of snakeman) might make an appearance later in the challenge.  The Thrilling Expeditions looks a good read for 99p - it's a Wild West special. 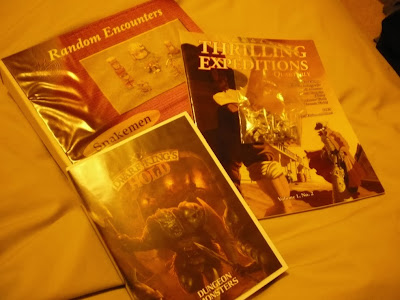