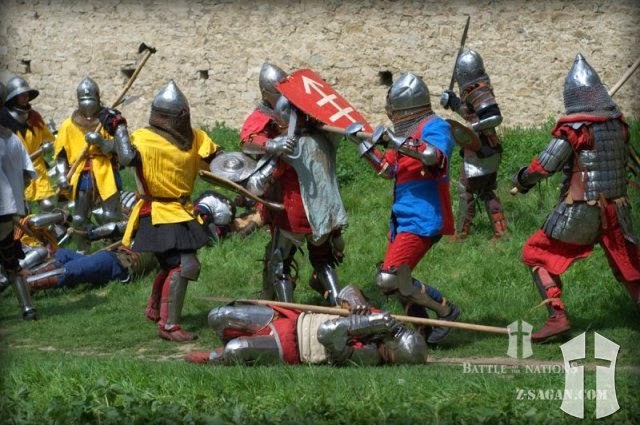 I caught the end half of an interesting programme on BBC3 last night called 'Knight Club'.  If followed a group guys joining the UK Team for Battle of the Nations.  This is a medieval re-enactment tournament, with full body contact (ie, they hit each other hard - broken limbs seemed common-place) matches are played 1v1, 5v5, 21v21 and 'all against all'.

The novices seemed a mixed lot, but the star for me was a Manc who basically just wanted a scrap with some Frenchmen ("this'll pay 'em back for the toilets").  Their 5v5 team had the misfortune to meet the Israelis (who used tactics like co-operating with each other "most of them are ex-military") and the Ukranians (who were big buggers who eschwed the blunted swords and used maces to bash them).  The team enjoyed themselves, the Manc decided that next year he'd put some training in, and they won the Best Newcomers' trophy.  Over-all, Team UK (who's stars seemed to be Polish) got to the semi-finals.

If you're in the UK you can follow this link to the BBC iPlayer to watch it on-line (but only for the next 6 days).  The team's webpage is at http://battleofthenations.org/about-us/.
at 17:26