I'm playing catch-up in flagging the obit of Sir Bernard Lovell, who died on 6 August and who's obits were published immediately afterwards:-

A week later the Telegraph carried a longer, more thoughtful piece about his legacy.
He was described by Sir Patrick Moore as the 'Isaac Newton of radio astronomy'.

Bernard Lovell was born in Bristol on 13 August 1913.  Like Arthur C. Clarke and Prof Colin Pillinger he never lost his West Country burr, which in later years made him stand out in television and radio interviews.  He was educated at the University of Bristol and then joined the University of Manchester.  During the War Lovell was in charge of a team developing radar systems which enabled night fighters to locate enemy aircraft, improved the aim of bombers during night raids, and enabled Coastal Command aircraft to detect submarines surfacing under cover of darkness.

With the end of the War, he used his contacts to acquire Army-surplus mobile radar units to further his researches into cosmic rays.  There was too much interference in Manchester, so he moved the equipment to the University's Botanical Gardens at Jodrell Bank.  There he eventually scraped together funding to build the radio observatory.

The Telegraph obit says that


the story of Jodrell Bank could serve as a metaphor for post-war British scientific and industrial development. Built in an atmosphere of argument and recrimination over its cost, and plagued by constant union disputes and sniping press comment, it nevertheless triumphed against all the odds, contributing greatly to Britain’s scientific reputation and to our understanding of deep space. 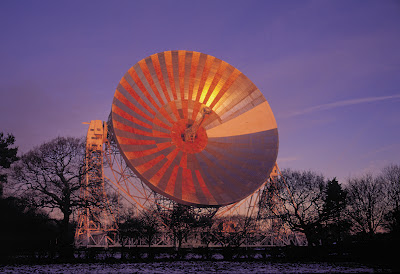 The telescope came on-line a few months before Sputnik was launched (it was the only telescope in the Western Hemisphere capable of tracking the satellite), and Lovell soon found himself enmeshed in the Space Race and Cold War. He claimed he was the subject of a Soviet assassination attempt.
at 23:07