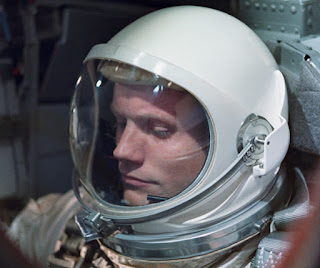 The tributes continue to pour in for Neil Armstrong, with the inevitable opinion pieces about the future (and history) of manned space exploration.

The Daily Telegraph obit does the biz as always.  The Guardian produces one that is workmanlike, but lacks any sense of inspiration.  The BBC gives us video and audio footage.

President Obama has called him 'among the greatest of American heroes - not just of his time, but of all time'.

Buzz Aldren, who famously  forgot to take any photos of Armstrong on the Moon, remembers him as 'a capable commander'.  Michael Collins can do better - 'He was the best and I will miss him terribly'.

Meanwhile, there are calls for him to be given a state funeral.  Almost certainly the last thing the retiring Armstrong would want, but it serves to remind people that Ohio has congressmen.

For those who may ask what they can do to honour Neil, we have a simple request. Honour his example of service, accomplishment and modesty, and the next time you walk outside on a clear night and see the moon smiling down at you, think of Neil Armstrong and give him a wink.