An interesting story about the search for the burial place of Richard III. 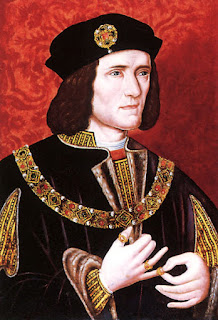 Archeologists have started a dig to look for the site of Greyfriars Church, part of a Franciscan Friary in Leicester.  It's where Richard was buried after his death at the Battle of Bosworth (1485) - after he was stripped, brought into Leicester and humiliatingly displayed by the victors.

Greyfriars was destroyed in 1538 during the disolution of the monastries and the archeaologists from the University of Leicester are now trying to establish its site.  I suspect the link to Richard is quite convenient in getting funding, and has certainly got them a lot of publicity.

If they do find a body they think is Richard's, they will do DNA comparisions with one of his descendants.


Apparently, it's archeological good practice to re-bury human remains as close as practicable to where they were found.  In this case, they likely to be interred in Leicester Cathedral. where no doubt the new grave will be a tourist attraction.  The dean will be pleased.
at 20:05