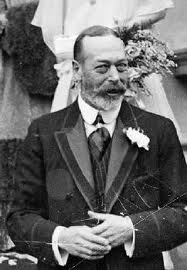 George V was the first British King in over 200 years not the have a German accent.

I admit to being a little surprised when I read this and feeling I might have come across some caricature about the Royal Family.  Surely Edward VII as English as they came?

Well, it was from the near-impeccable source that is the Oxford Dictionary of British Biography, so I accept it.  Edward was bought up by a German governess and always spoke German with his father (when they were speaking, that is).
at 08:32