The (Other) Duke of Cambridge

Prince George was born on 26 March 1819.  He was the eldest child and only son of  Prince Adolphus, Duke of Cambridge, the tenth child of George III, and Princess Augusta, a descendent of George II .   A proper Hanoverian, he was even born there, as his father served as viceroy for his brothers.  The family moved back to England in 1837, when the accession of George's cousin Victoria to the British throne led to the separation of the two crowns.  He succeed to the Dukedom on his father's death in 1850.

George followed his father into the army, moving quickly up the ranks - by 1837 he was a colonel in both the Hanoverian and British Armies.  But his was no honorary position - he was stationed at Gibraltar, in Ireland and in the Ionian Islands.  Prince George was appointed Inspector of the Cavalry in 1852.

In 1854 he was promoted to the rank of lieutenant-general, in command of the 1st Division (Guards and Highland brigades), serving in the Crimean War.  He was present at the battles of the Alma, Balaclava and Inkerman (where his horse was shot under him) and at the siege of Sevastopol.  He received the thanks of Parliament.

In July 1856, the Duke was appointed general commanding-in-chief of the British Army, a post that was retitled field marshal commanding-in-chief on him gaining that rank in 1862, and commander-in-chief of the forces in 1887.   He served as commander-in-chief for 39 years.  He was finally forced out office in 1895 after years of opposing army reform - 'There is a time for everything, and the time for change is when you can no longer help it.' 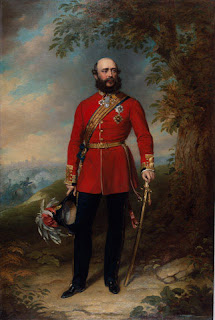 The duke died in London on 17 March 1904, the last surviving grandson of George III.  He is buried in Kensal Green Cemetery.

HRH wears his medals in a Victorian way. His campaign medals are up in his collar and his order stars where a modern soldier would put his medals. This isn't just a one-off or due to the constraints of the jacket he is wearing, as can be seen in most portraits of him.


The orders and medals are, along with his field marshal's baton, uniform and other items in the Guards' Museum, Wellington Barracks, London.

Following regulations for wear, Cambridge only has four stars in each picture.

In both portraits he wears the blue sash of the the Garter with the star in the 'North' position.  It appears to differ slightly in design from the C19th example shown here.

At the 'South' of the arrangement is the star of the GCB (military division).

At the  'East' in the photograph is the star of a KP.

To the 'West' in the miniature is the star of the GCSI.  Cambridge was created a GCSI in 1877.


However, Cambridge had plenty of stars in the box.  He acquired a full set of British orders.  He was