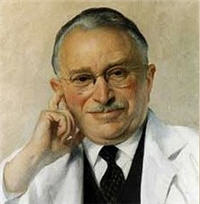 I'd never heard of Guttmann, but he was a very interesting character.  A Jewish refugee, he was invited to establish the National Spinal Injuries Centre at Stoke Mandeville Hospital in 1943.  Recognising the importance of sport therapy, in 1948 (to co-incide with the opening of the London Olympics) he established an annual sporting competition for paraplegics.  By 1952 the Stoke Mandeville Games had attracted more than 130 international competitors, and in 1960 they were held alongside the Olympic Games in Rome - those are now recognised as the first Paralypic Games.

Hopefully, Guttmann is going to be featured prominently in the London Games and will become better-known.